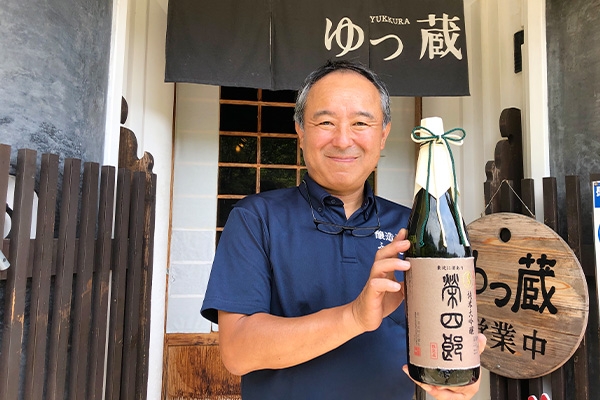 Ahead of a Club sake brewery tour to Fukushima, two local producers discuss their expansion plans.

There’s something magical about walking into a sake brewery. The traditional kura warehouse, the giant vats and the sweet scent of fermented yeast.

That’s what strikes your nostrils when you enter Tsurunoe Shuzo brewery in Aizu-Wakamatsu in Fukushima Prefecture. It’s one of two local sake producers that Club Members will visit in October, when rice is harvested and sake-making begins.

Sake has long played a central role in Japanese culture, from sealing marriages to toasting milestone events. But brewers have faced powerful headwinds in recent years. With sake consumption in decline since the 1970s, Fukushima breweries faced an additional challenge following the nuclear disaster in 2011. Nationwide, sake sales fell 11 percent in 2020 as people stayed home amid the coronavirus pandemic.

At Tsurunoe, the focus is on continuing a family business established in 1794. It’s been at the same spot in Nanokamachi, an old quarter north of Tsuruga Castle, ever since. Usually closed to tours, the brewery’s interior is a shadowy, scented realm of aging, wooden beams and gleaming, steel barrels where much of the work is still done the old-fashioned way.

“We’re really orthodox in the way we make sake,” says brewery chief Hirotoshi Mukai. “You can taste the sweetness of the local Aizu rice as well as the umami flavor, rounded off with a refreshing aftertaste.”

Also sold in Taiwan, Hong Kong and the United States, Tsurunoe’s main products include Aizuchujo-brand junmai daiginjo—sake made from rice with the highest rates of polishing and water only—and daiginjo, where brewer’s alcohol is added to enhance flavor. A lighter brand is Yuri, whose daiginjo won gold at this year’s Japan Sake Awards.

A 30-minute drive from Tsurunoe, Eisen Shuzo brewery sits on the slopes of Mount Bandai. Eisen was founded in 1869 in Aizu-Wakamatsu but gradually moved to its current location, where it has had its entire operation since 2008.

“The purity of the water here was the reason we moved,” says Yuji Miyamori, head of the brewery. “It comes from Oguninuma and is one of the 100 famous springs designated by the national government.”

Eisen has continued as a family business even after being acquired by the supermarket chain Lion D’or in 2021. In contrast to many sake breweries, its facility is a strikingly up-to-date operation, with modern architecture and videos for tours.

A kura serves as a tasting room and shop. The brewery’s flagship sake, Eishiro, named after founder Eishiro Miyamori, comes in junmai daiginjo and daiginjo versions and pairs especially well with dishes featuring fruits or herbs, according to Miyamori. The Eisen lineup is rounded out by umeshu plum wine and nonalcoholic honey amazake (a fermented rice drink), which goes well with coffee.

“We’ve been concentrating on the domestic market but would like to expand to the US, Europe and elsewhere in Asia,” Miyamori says of Eisen’s non-sake offerings. “Our sakes are very easy to drink, and that’s, of course, because of the softness of our spring water.”