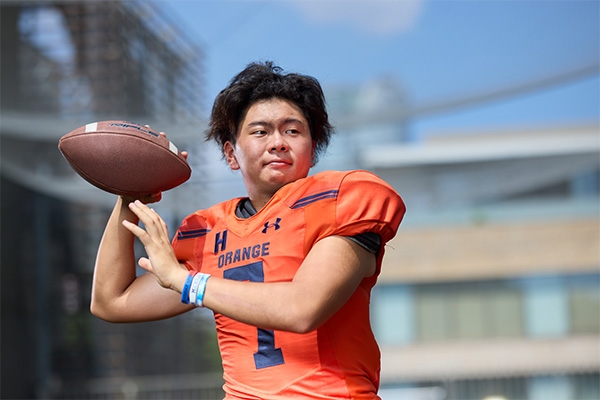 As football season kicks off in the States, the sport finds growing popularity in Japan.

Few places ooze football history like the Big House, the home of the University of Michigan Wolverines. With a capacity of 107,601, it is the largest stadium in the Western Hemisphere and the third largest in the world.

The Tokyo Dome, in contrast, seats 55,000. When Member Kento Abe, 17, stood in the Big House for the closing ceremonies of the Junior Flag Football International Cup 2022 in June, he could feel the inspiration of another gridiron great: Tom Brady. The seven-time Super Bowl champion led the Wolverines on this field in 1998 and 1999.

Abe, who was recently named one of the top 100 high school football players in Japan by Huddle Magazine, had just helped Japan take silver in the boys’ under-17 tournament, organized by USA Football. It was another memorable stop on a journey that began when he was 9.

While American football is played at the collegiate and professional levels in Japan, it remains a niche sport compared with the likes of baseball, soccer and rugby. But Abe chose it over other options after a friend in Hawaii got him interested. 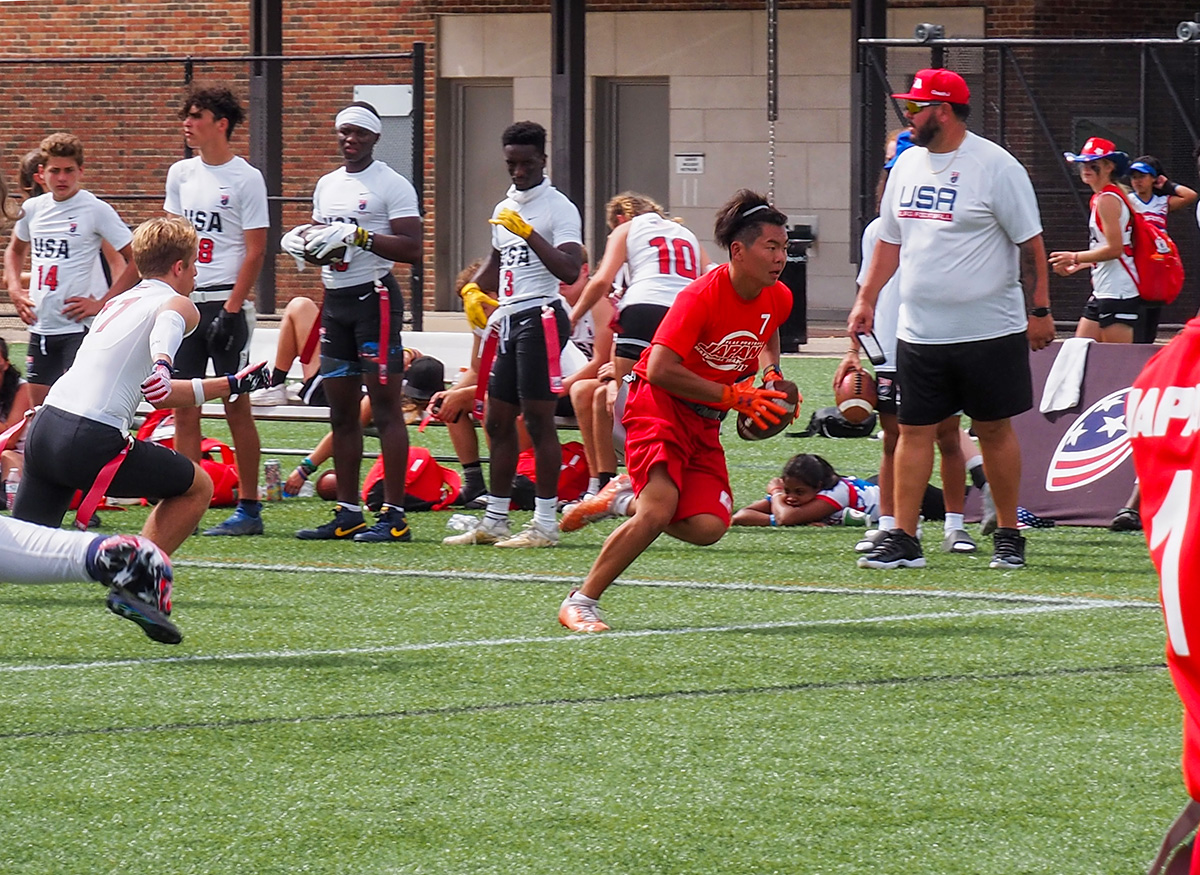 Full-contact, tackle football isn’t played in Japan until high school, so Abe started with flag football. Now, as a student at Hosei University Senior High School, he also plays the traditional game. Like past stars such as the Dallas Cowboys’ Deion Sanders and the New England Patriots’ Troy Brown, he is a two-way player. On defense, he plays linebacker in contact football and cornerback in flag. On offense, he plays wide receiver in both.

A key stop on the road to Michigan came in another US state, North Carolina, when Abe was 11. He attended a month-long flag football camp hosted by the YMCA in Charlotte, home of the National Football League’s Carolina Panthers.

Encouraged by the experience, he refined his skills and later helped his junior high school team finish second in a Japanese national tournament when he was 15. Success spurred him to reach higher, and this year he was one of 12 players chosen for the Japan boys’ U-17 national team that competed in the Junior Flag Football International Cup from June 18 to 21.

Making the cut and preparing for the tournament took a lot of dedication.

“Tryouts were held in Tokyo and Osaka, and we had to go through four rounds,” he explains. “The players are from all over Japan, so we gathered four times to practice before the trip. Practices were in late May and early June. Some were in Tokyo and some in Osaka. It’s a difficult time to make trips because of the start of the school year, but I was able to attend three.” 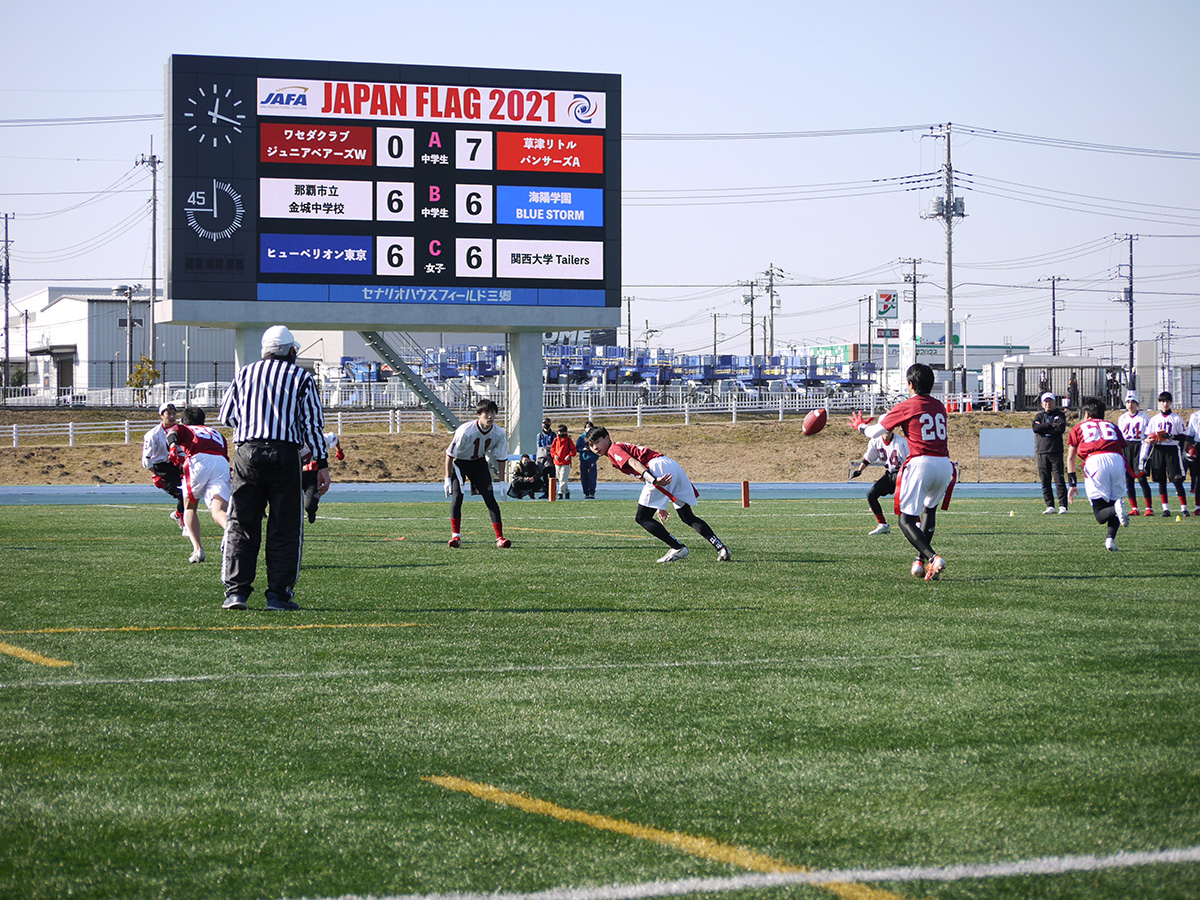 In Michigan, Abe and his teammates competed against Panama, the US national team and UA Elite, an in-state squad. The five-on-five matches were played at the university’s Mitchell Field and followed International Federation of American Football (IFAF) rules. Japan battled their way to the final before falling to the US national team 52–21.

Abe enjoyed the experience despite the loss. “There were a couple of five-star players on the US national team. They play so well. I think they will go to the NFL,” he says with a big smile. “I feel really lucky to have played them in high school.”

If those players are NFL bound, it would be a fitting result. The NFL operates a network of flag football leagues to nurture and develop young talent. Collectively known as NFL Flag, the leagues grew out of a global health and wellness initiative called Play Football, which the NFL launched in the 1990s. The goal of that initiative was to make football accessible to all kids, regardless of age, gender or size. Today, more than 500,000 youth athletes participate each year.

Open to ages 4 to 17, the no-contact leagues give boys and girls a chance “to develop their fundamental football skills in a positive, inclusive environment,” says the NFL. Beyond refining their game, kids “discover the importance of sportsmanship, teamwork and friendship, both on and off the field.”

NFL Flag also serves as a pathway for more female athletes to play the game in college. While tackle bouts between giants such as the Alabama Crimson Tide and the Ohio State Buckeyes grab the headlines, flag football is an option for a wider range of students. And last year, the NFL, together with the National Association of Intercollegiate Athletics and youth sports organizer Reigning Champs Experiences, teamed up with 15 schools to put flag football on the path to becoming an official championship sport. These colleges will offer scholarships for female student athletes playing the game. The process will take some years to advance flag football to full championship level, which will require 40 schools to join.

Flag football made its international, multi-sport debut this summer at the 2022 World Games. At the gathering in Birmingham, Alabama, NFL Executive Vice-President of Football Operations Troy Vincent said, “When I’ve been asked over the last 24 months, in particular, what does the next 100 years look like when you look at football, it’s not professional football, it’s flag.”

Teams from 16 nations competed in the World Games, a preview of what would be a giant leap for the sport: inclusion in the 2028 Los Angeles Summer Olympics. The NFL has joined a push by IFAF, an International Olympic Committee provisional member, to make that happen.

If it does, it would kickstart flag football in Japan, says Takuro Okumura, deputy secretary general of the Japan Flag Football Organization (JFFO). “If it is a sport which children can play even in elementary school with the aim of one day competing in the Olympics, I think there is a very high possibility that it will become popular.” 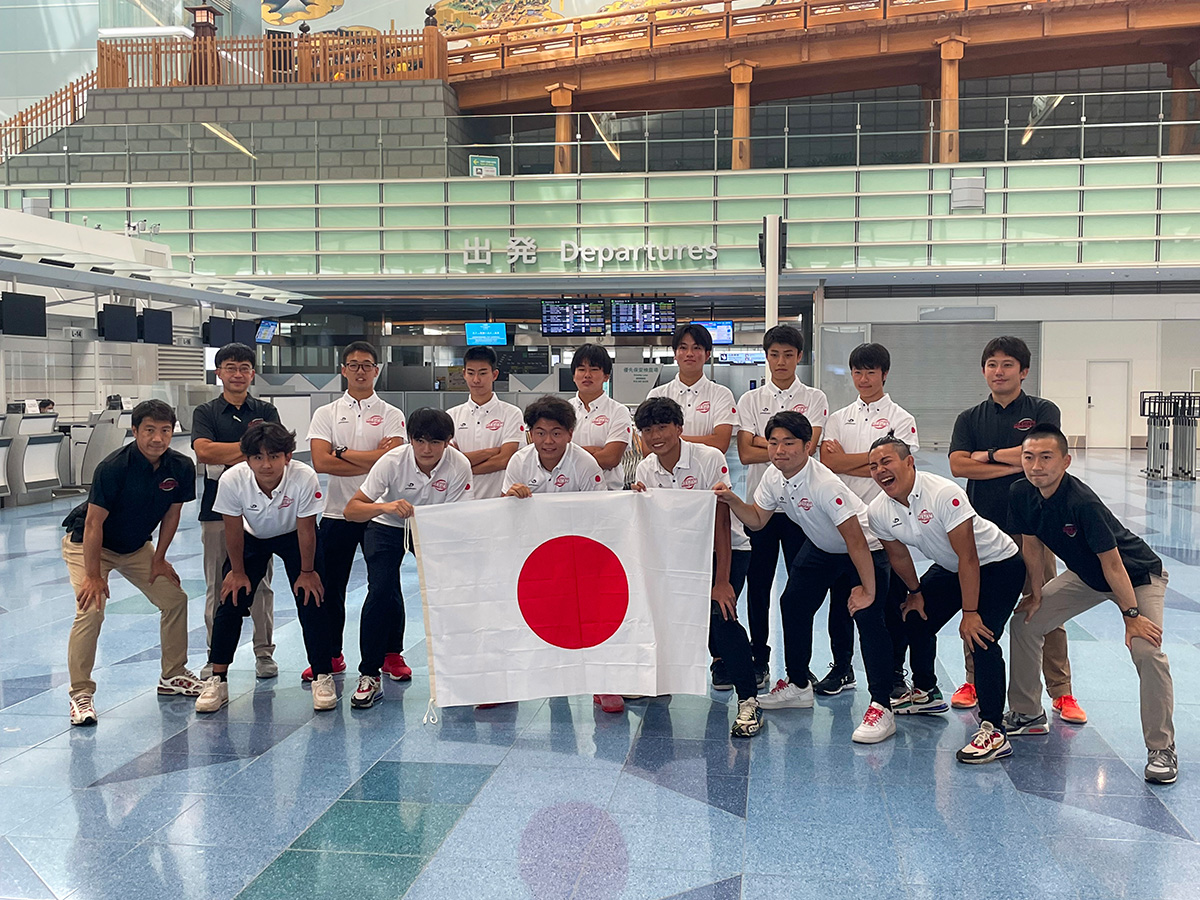 Image: Abe (front center) and the Japan U-17 national team leave for Michigan

The prospects are good. IFAF comprises 72 nations. All have flag football teams and about 70 percent have leagues. Coupled with the NFL’s clout and the educational benefits, plus the fact that diversity and inclusion is at the core of the game, it fits well with Olympic ideals.

The developmental benefits for kids is a point highlighted in almost every discussion of flag football. Member Shinichi Yokote, who played football in high school and university, said the game has been good for his twin sons Kazumasa and Kiichi, 14, who play on the Keio Junior High School team.

“By running around the field with friends, they can build up their physical strength, share a common goal and learn the importance of working together to reach that goal,” he says.

Okumura agrees. “The flow of the game—from huddle to play and back—is a process of problem-solving, and you experience it abundantly. This makes flag football an effective way to develop problem-solving skills.”

He notes how each player must carry out a task specific to their position, and that the skills required for each may be very different.

“Since each player can make use of their own strengths in the play, it is easy to make the most of their individuality and to grow a relationship built on mutual respect.”

Okumura says the JFFO’s mission is to expand this opportunity to more kids throughout Japan. “Our organization puts a lot of effort into supporting physical education in elementary schools, such as by donating equipment and booklets,” he explains. “We aim not only to make flag football popular, but also to connect with other sports through flag football. This guarantees opportunities for everyone to participate in society and create a place to belong.” 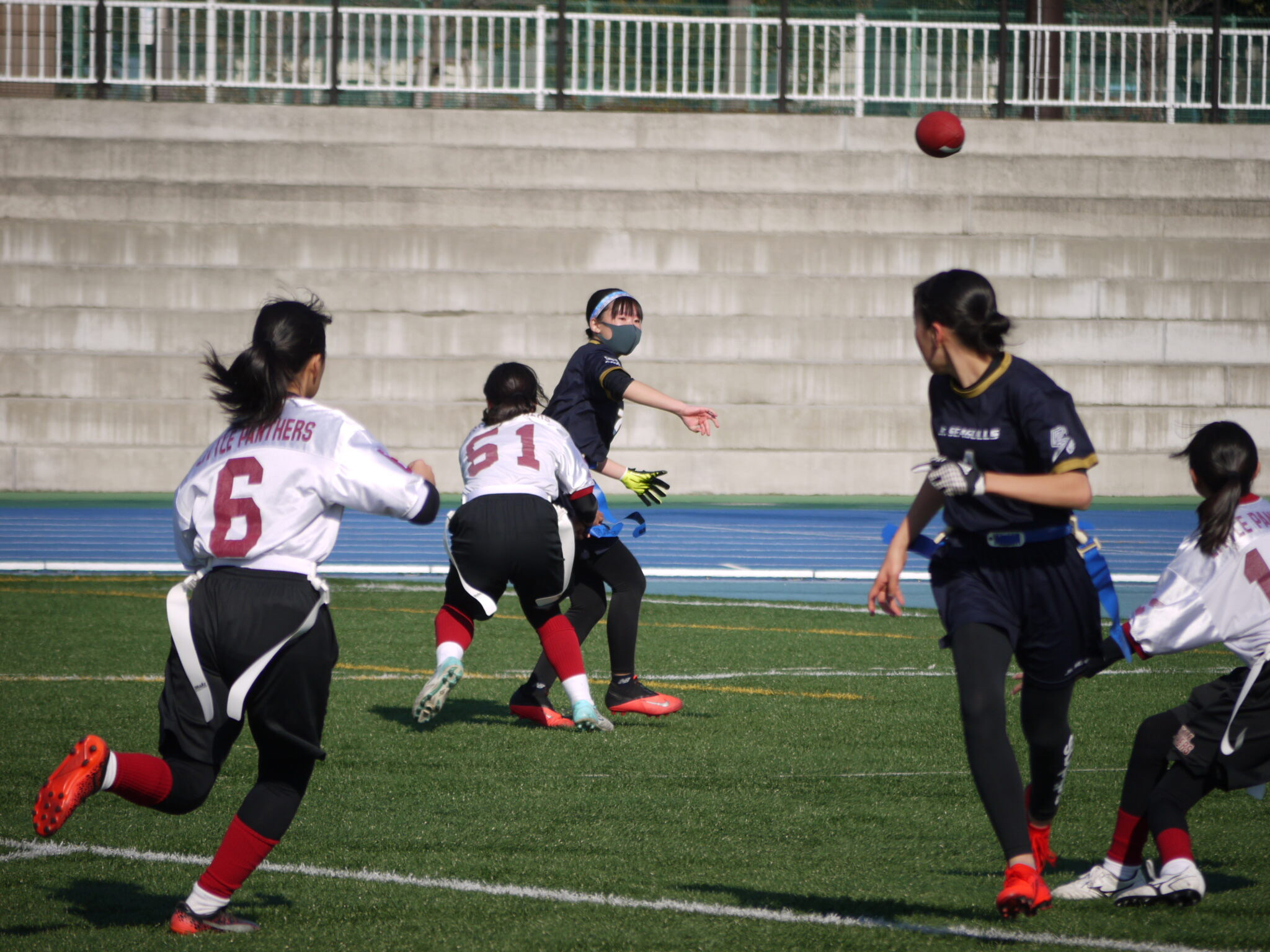 Club Human Resources Manager Naoto Takada experienced the excitement and benefits himself while playing football in high school. Having lived in the US during kindergarten and elementary school, he developed a love for the game. He wanted the same for his son, and even took on the task of coaching his son’s elementary school team.

“It’s a wonderful sport that allows each child to own a certain role; it gives them an opportunity to think strategically,” he explains. “Contact is not allowed, thus it’s a safe game that all boys and girls can enjoy as they experience the full essence of American football. They gain an understanding of and can enjoy the strategic aspects of the sport.”

Strategy is what Kazumasa and Kiichi Yokote say attracted them to the game. “I feel that working together as a team is more important in flag football compared with other sports,” Kiichi shares. Kazumasa adds that one of the attractions is that it is a sport which can be enjoyed by everyone, regardless of body size. “Boys and girls can play, and there is no tackling. We have a lot of friends who play, and it’s fun to think about strategies with them.”

As for Abe, the next strategic move is where to take his talents. But he already has the play drawn up. With his high school career soon coming to a close, he hopes to run a route to the Hosei University Orange, one of Japan’s top college teams which has been playing America’s brand of football since 1935, just three years after the first Los Angeles Olympics. And if a storybook ending awaits, he might close out the journey in the City of Angels, with gold around his neck atop the podium.