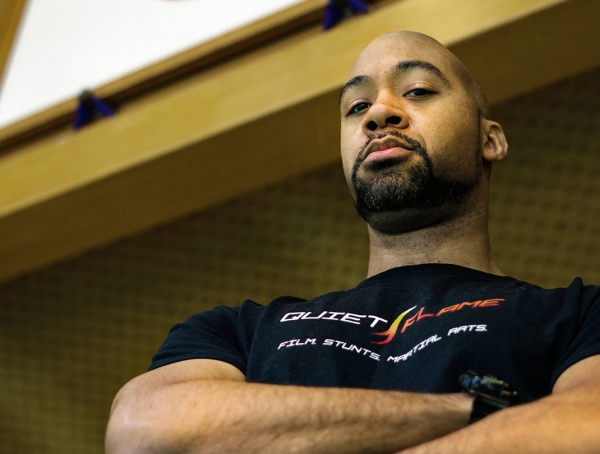 Chuck Johnson was still new to Tokyo when a student approached him during his English school’s welcome party. Why, the man wondered, did this new teacher look like he could fight off everyone in the room?

Johnson explained how he was a former Michigan State taekwondo champion and ranked fourth dan. The student wasn’t surprised.

The one-time Olympic hopeful had given up professional fighting and planned on staying abroad no more than a year. After sparring, though, the student offered him a job as a bodyguard for visiting celebrities.

Johnson’s first film role followed. During production of 2004’s Godzilla: Final Wars, in which he played a soldier, a director pulled Johnson aside. How about putting his martial arts skills to use with the movie’s professional stunt team?

“When the opportunity to do it on camera came,” says Johnson, 40, who wore out VHS tapes of Bruce Lee and Jackie Chan growing up outside Detroit, “I just couldn’t resist.”

Several years and dozens of TV, film and video game credits later, Johnson has molded himself into one of Asia’s preeminent foreign stunt actors. He still trains in and teaches martial arts, including the Club’s youth taekwondo program, but his upcoming stunt choreography course will be the first chance for Tokyo’s budding action heroes to pull back the curtain on Hollywood stage fighting in English.

Even in his early years, Johnson sensed the value of a Western stuntman in Japan’s homogenous entertainment industry.

“For at least a decade, I was the only [foreign] stunt guy here,” Johnson explains. “There could be a casting where they needed a 50-year-old, balding, overweight, white guy. ‘We don’t have that, so send Chuck. Chuck, you’re being Santa Claus today, OK?’”

Johnson made the most of that unusual monopoly, which meant reorienting his taekwondo skills.

“In real fighting, no matter how much it hurts, you never want to show it,” Johnson says. “In fight choreography, you play all that up. The goal is to get people to see it.”

Collaboration is key, he adds. An experienced team of stunt actors may seem like mortal enemies, but that only emerges when they know when a roundhouse is coming or how to sell a landed punch.

No one understands the appeal of traditional arts more than Johnson, but he’s proof of how transferring skills can lead to new passions and new careers. With superhero flicks more popular than ever and video game profits ballooning every year, who says there’s no future in playing the hero?

“All I can say is, if you like action movies,” Johnson says, “come learn how they work.”