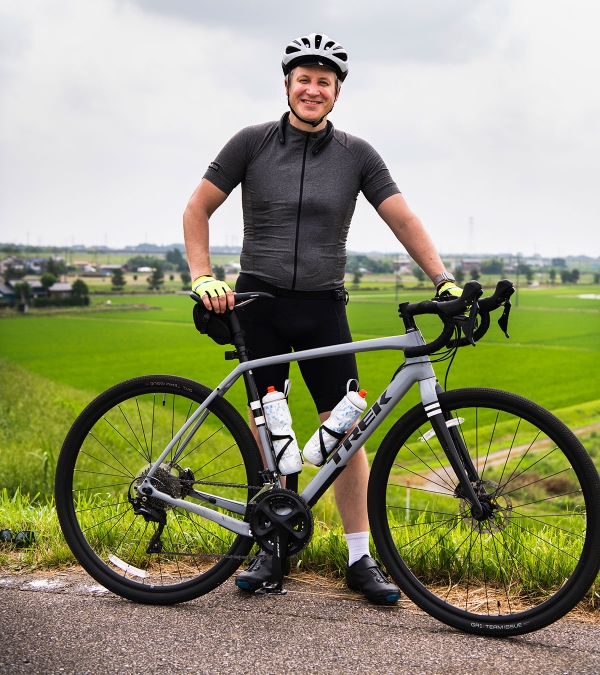 A recent cycling convert, Member Spencer Wolfe shares his two-wheeled journey in Japan and beyond.

It’s two years now since I got into cycling. A guy was coming out of the Club and he had a funky-looking, British [foldable] bike—a Brompton—and I thought, “What is that?” And it got me thinking that it would be nice to get out and do stuff. I ended up buying a Brompton.

I use it a lot and travel with it. I’ve ridden it everywhere, from Sweden to Washington, DC, to Oregon. It’s really convenient because you can get on a plane, train or bus with it. And it’s the best design possible.

I’ve always had a bike at the office in case there is a major event. I live in Saitama, and I thought if there were ever a 3/11 [earthquake] again, I would need something so I could get home. About six months after I got the Brompton, I bought a cross bike, which is faster around Tokyo. I started using it to cycle from my office to the Club to use the gym.

I wanted to lose a few kilos, but I’m not into running or swimming. Cycling seemed the best way to get good exercise. I then bought a gravel bike, which is the one that does all the mileage. I bought it because it has slightly bigger tires [than a regular road bike] and I thought it would be less susceptible to a puncture. Nearly 3,500 kilometers later, that’s worked out.

Japan is a really good place to ride. You can get a good, long ride in if you ride along the rivers. When the Club was closed, I was riding about 30 kilometers every morning along the Edo River. I ride year-round and so I’ve ridden in 35-degree weather and in minus weather.

I’ve learned a lot about the countryside of Japan just by getting out and seeing it. I often cycle out to a feudal castle on the [border] of Ibaraki, Chiba and Saitama. Because you have to get back from wherever you go, you need to regulate your energy and fuel your body. My summer maximum is about 100 kilometers.

The highlights of the last two years have been getting to ride in any country and meeting different people. I go to Sweden every year for work, and since I’ve been taking my Brompton, I’ve really discovered the country. Cycling gives you the freedom to see what is around you. I went up to Nikko with the gravel bike at the end of last year. It’s really beautiful there. As a cyclist, you can [appreciate] a lot more around you than somebody whipping past in a car.

Basically, it was the Club that got me into cycling because I got a lot of advice from other Members on bikes and what parts to buy. I would highly recommend cycling. It’s fun and it has made me wonder, “Why didn’t I start this sooner?”