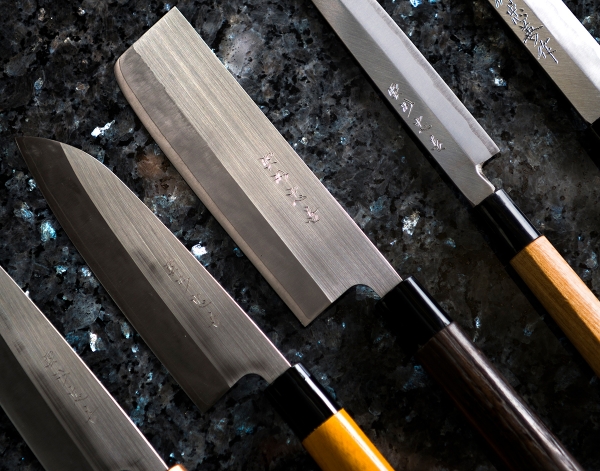 Want to take the grind out of everyday cooking? The answer lies in the knife drawer.

Izumo Grand Shrine was in trouble.

The priests of the sacred Shinto site in Shimane Prefecture needed a ritual shinshu digging implement for a groundbreaking ceremony, but the only one in their possession was several hundred years old and had fallen into utter disrepair.

With nothing but the decaying tool as his guide, Hisatada Kawashima forged a new shinshu from scratch.

“I come from a long line of blacksmiths,” says Kawashima, 83, a native of Shimane in southwest Japan. “My father was a swordsmith, and ever since I was a kid, I would play in his workshop and copy everything he did.”

Once an aspiring katanakaji swordsmith himself, Kawashima now makes his living as an accomplished jack-of-all-trades blacksmith in his home prefecture on the Sea of Japan. He and his wares are well known throughout Shimane, says Mayuko Rutledge. 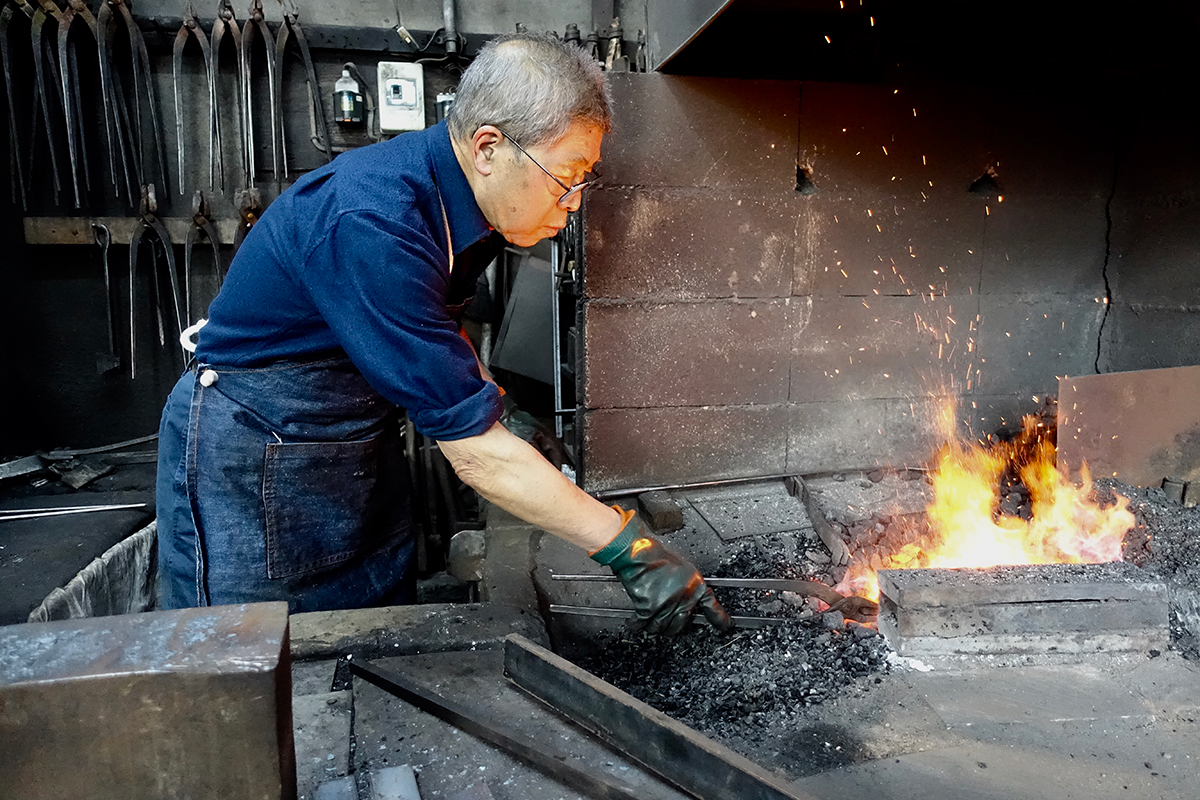 “Growing up, we always used his knives,” Rutledge explains of Kawashima’s role as the neighborhood blacksmith of a bygone age. “I don’t think [my parents] were looking for high-quality knives. It’s just that Shimane isn’t this very big city.”

Years later, after traveling abroad and finding something lacking in the knives she would use, Rutledge returned to Japan and happened upon an idea. By selling Kawashima’s knives across Japan, she could help grow both his business and the reputation of Shimane steel.

She enlisted the services of a friend and sales guru, Ali Buford. The result was Jikuu, a small-batch kitchenware company focused on premium-quality knives, cutting boards and other utensils. At a Connections’ class at the Club in December, Buford and Rutledge will explain how to choose, use and maintain kitchenware.

Though Jikuu mainly sells to the home chef in search of a more elevated cooking experience, a handful of professional chefs around Tokyo are also dedicated users of Kawashima’s blades.

“When I told him that some chefs really like his knives, he was like, ‘Oh, no, no, no,’” recalls Rutledge of the master craftsman’s display of humility.

“When he was younger,” adds Buford, who grew up in Connecticut, “he’d come to the city and to Takashimaya [department store], but that’s slowed down because he just physically can’t come here and do that.” 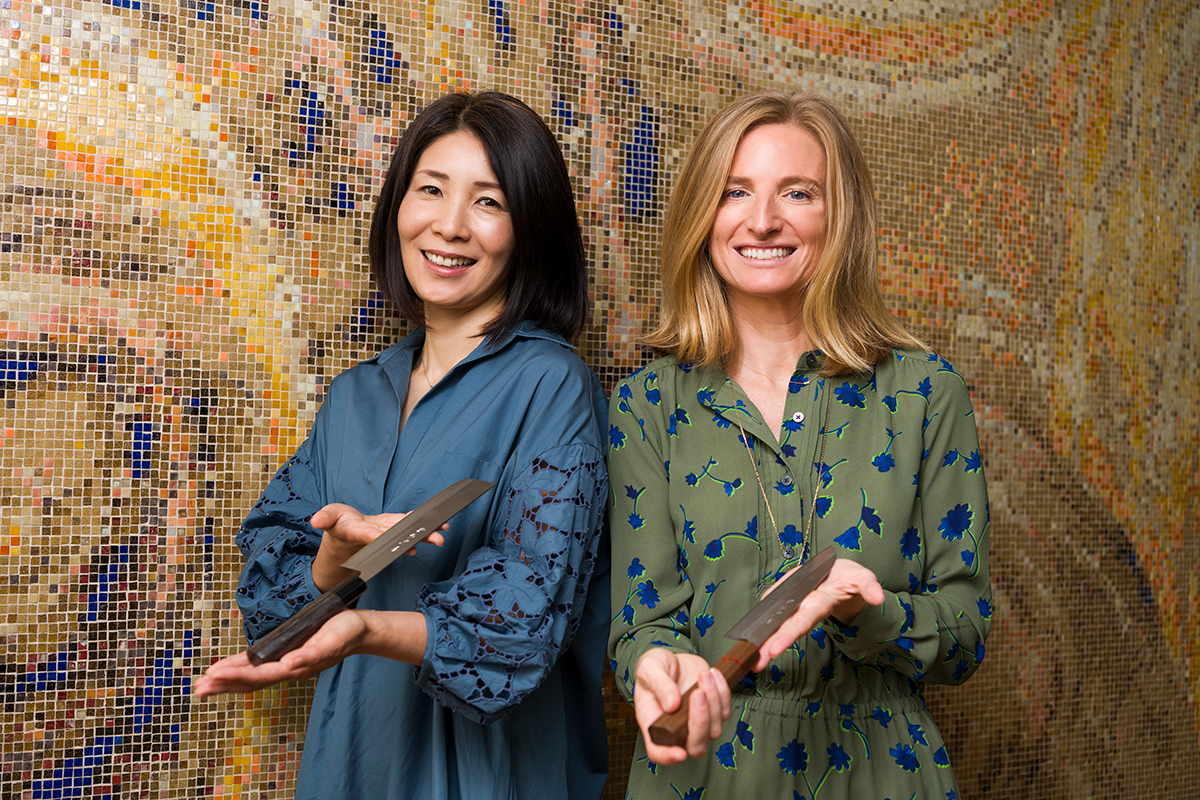 From his Shimane workshop, slowing down is the last thing Kawashima seems ready to do.

Like a mighty Japanese cedar tree, each of Kawashima’s knives begins with the root: the nakago foot, which is later inserted into the handle. After tempering the nakago in a forge at 1,000 degrees Celsius, Kawashima hammers out the blade, files and shapes it into the form required (such as Jikuu’s long, slender sashimi knife) and applies a special clay to the bladed edge for extra hardness and the telltale, undulating patterning of Japanese steel.

He then fires the blade in an 800- degree, charcoal-fueled forge.

“I can’t fire the steel for too long here,” explains Kawashima, who works without any manner of thermometer, “so I’m following the color of the blade very closely. Then, I quench.”

The result, from Kawashima’s and other forges employing Japanese steel, is some of the highest-quality kitchen knives.

“Many professional chefs around the world now swear by Japanese steel,” says Scott Kihara, the Club’s chef de cuisine. “From my experience, Japanese knives tend to be lighter and more agile than their European counterparts, which typically have more heft.”

What Japanese knives sacrifice in bulk, they more than make up for in precision. A knife need not be weighty if the blade is sharp enough to slice cleanly through ingredients.

“Using a dull knife is like trying to ride a bike with a flat tire,” explains Buford.

“Just try to dice a tomato with one of my knives and see how it feels,” says Kawashima.

Just as a sharper knife is a safer knife, Buford explains that superior blades lead to more satisfying kitchen experiences.

“I used to really dread having to do all that chopping,” she says. “[Kawashima’s knives] have made it feel enjoyable versus feeling like a chore.”

Any way you slice it, a knife like that is a cut above.

Fall Enrichment Classes
Browse the dozens of Connections-organized lessons, seminars and tours through the Club website from August 5.