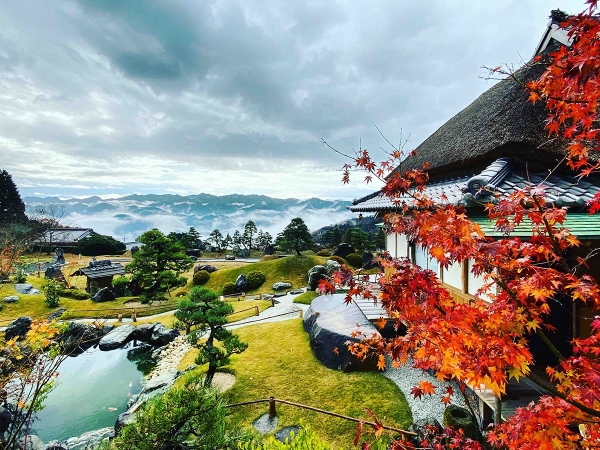 With a conspicuous dearth of foreign tourists in Japan this summer, Members explain how that could be a blessing in disguise for those who venture off the beaten path.

This age-old sentiment may seem unnecessarily cold, especially as the world grapples with a global pandemic. But governments and organizations are taking the initiative to try and resuscitate Japan’s once-booming tourism industry.

In May, according to the JTB Group, international visitors to Japan were down a staggering 99.9 percent from the previous year, with more than 100 countries placed on restricted entry lists. And with no sign that that will change in the near future, travel agencies are repositioning themselves.

“Because of the unsure times we are facing, we recently decided to shift to domestic tourism, especially expats,” says Andrea Katsuya of the travel agency Heartland Japan. “We are dedicated to helping rural areas [attract more visitors].”

The Japanese government is doing its part, too. Its Go To travel campaign, launched last month, uses discounts and other financial incentives to encourage residents to start traveling around Japan again. Meanwhile, JR East is offering half-price fares on bullet train and some limited-express journeys from August 20 to March 2021.

So rather than let this crisis truly go to waste, why not uncover some of Japan’s hidden travel gems? For inspiration, five trailblazing Members share their own diamonds in the country’s rural rough.

“The clients of our travel agency will typically travel to places such as Kyoto, Kanazawa and Takayama. Although lovely, these locations are usually very crowded. And to go to a place like Sasayuri-Ann? There’s nobody there.

Sasayuri-Ann is about a 50-minute drive from Nara and a 90-minute drive from Kyoto, so it’s an easy destination to reach. It’s basically a farming area, so it gives people an opportunity to see a [side of] Japan that’s not a city.

People enjoy the isolation. The landscape, the food, the scenery—it’s all beautiful. The guy who owns [the guesthouses] will take you on hikes. He’ll do Zen meditation with you. He’ll work with you to teach you how to play a bamboo flute. The owner speaks English, and people are made to feel like they’re at home.

There are very few places you could go to in Japan where you’re basically the only guest and you’re not going to see anybody else. It’s just a lovely place. Under the current circumstances with Covid-19, I would imagine that a lot of people want to get away. At Sasayuri-Ann, you go to get away.

The benefit of traveling right now is that places will be quiet. You can see places as they may have been 20 years ago. And that’s an incentive to go out and explore the country.” Philip Rosenfeld 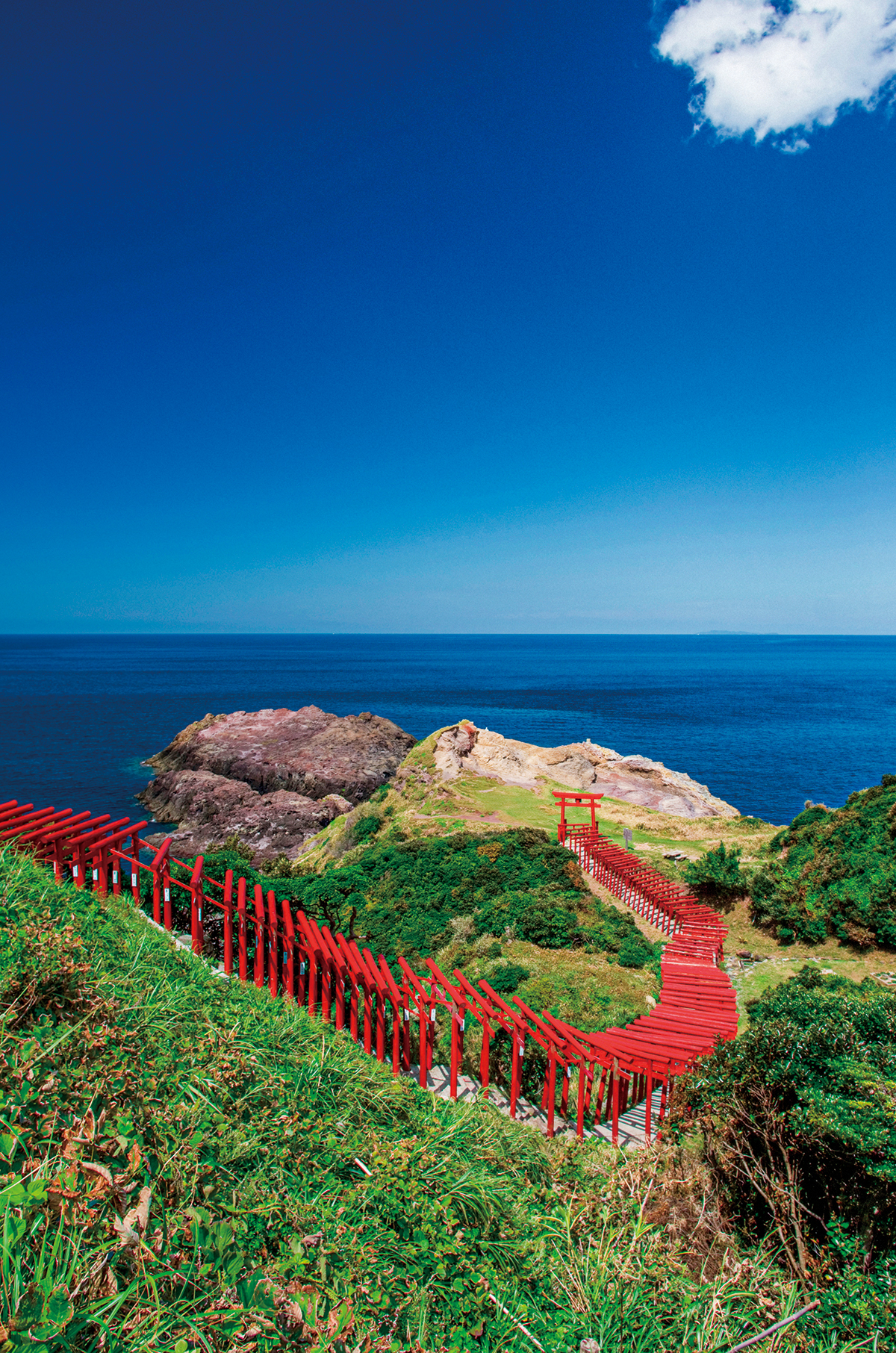 “My husband was sick with leukemia and stayed home for three years. After [he received a bone marrow transplant and went into remission], he wanted to go to Yamaguchi because his ancestors were from there.

I visited a lot of places by myself in the past because my husband was working a lot. But this trip [was different] because my husband loves history. The area is a very historical place, especially when it comes to the late Edo period. It was called Choshu and played a leading role in overthrowing the Tokugawa shogunate, so the castle in [Hagi] and some residences and mansions are preserved very well.

The famous [Motonosumi Inari Shrine] with a lot of torii gates is there. The contrast is so beautiful. The red torii and the greenery of the mountain and the blue ocean and sky are just so beautiful. I am not a good photographer, so I don’t usually take pictures, but it was so nice that I had to take some.

The Sea of Japan is usually dark, but it looked like it had tropical colors. And on Tsunoshima [off the coast of mainland Yamaguchi], there is a white sand beach. We went there in May, but it might be even better in the summer. We’ll surely be back.” Kazuko Morio 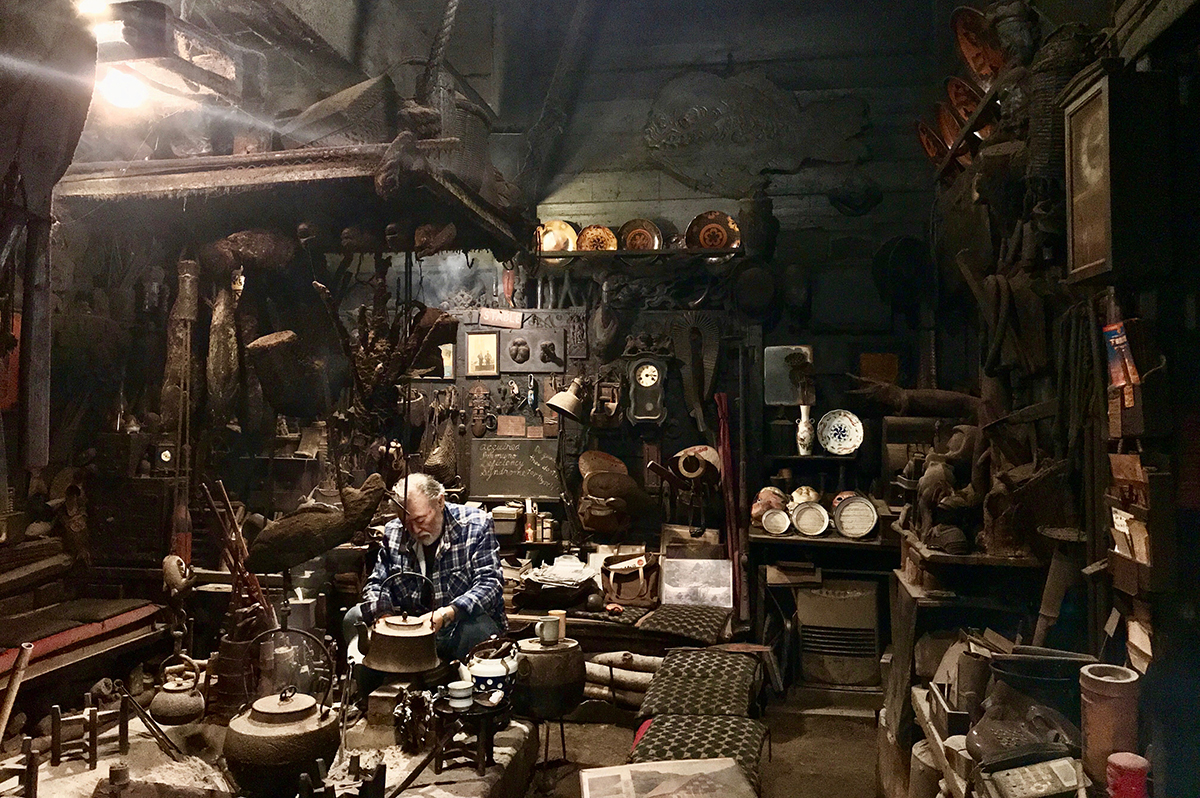 “The entire Izu Peninsula is a UNESCO Global Geopark. There are fantastic rock formations and rugged coastlines with great hiking trails. I would suggest traveling there by car as there is actually a lot to discover off the beaten path.

Last time [we visited Shimoda], we explored the Murakami gassho zukuri farmhouse, which is one of these old, five-story farmhouses with a thatched roof. This one was dismantled from its original location in Shirakawago, which is a UNESCO World Heritage site, and rebuilt in Shimoda in 1964.

These days, it has been transformed into a folk art museum where you get to see traditional Japanese culture and the way of life of Japanese families from 200 years ago. It’s something worth exploring for people who have little time or don’t have the chance to go all the way to Shirakawago.

Don’t miss the hiking trails along the coastline. We walked the scenic Suzuki Trail and the Minami Izu Trail to Cape Tarai, which has stunning views and temples along the way. One time, we took a trip to the southernmost point on the Izu Peninsula, Cape Irozaki, which has a holy rock. When you circle it, you see a Shinto shrine called Imuro jinja, which claims to have been founded during the Nara period [710–794], built directly into the rock.

Kanagawa and Chiba beaches might be closer to Tokyo, but nothing can beat the ones in Shimoda.” Regine Pocsatko 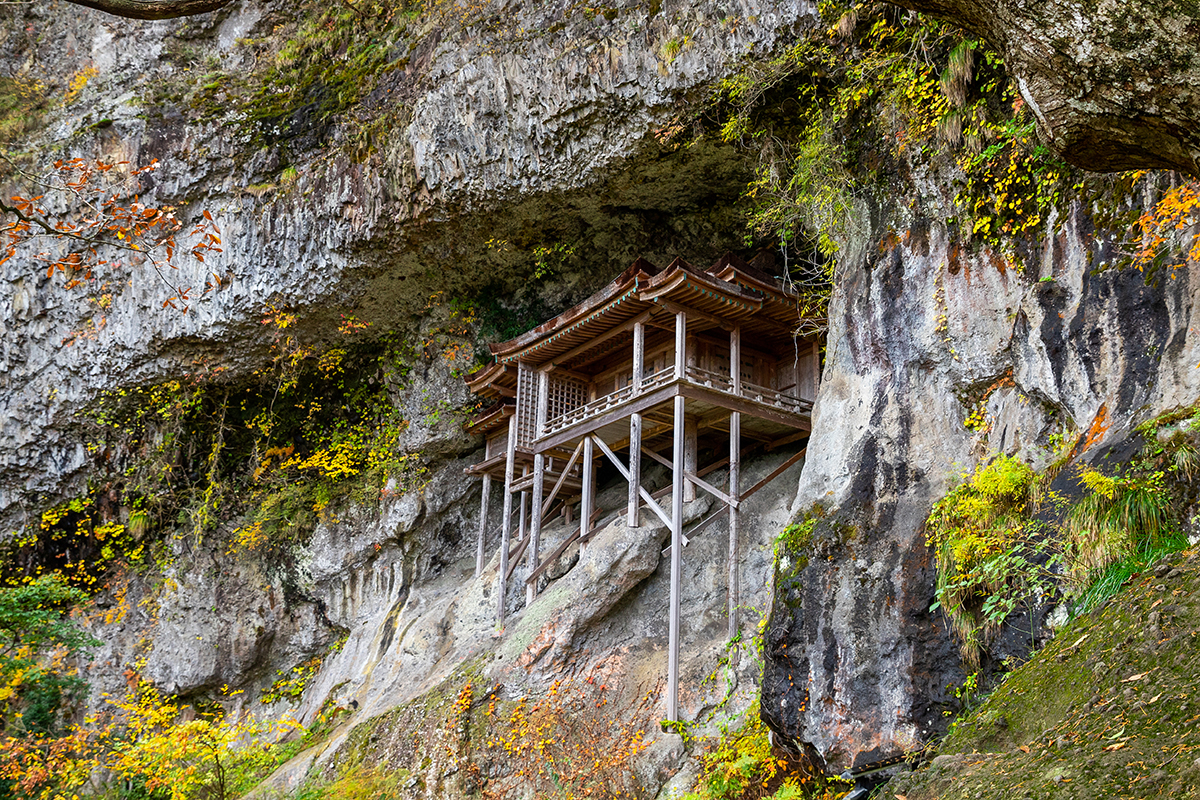 “We went to Tottori because we wanted to see the sand dunes. In fact, they were smaller than I had expected, but they were so steep. They’re really challenging to climb.

[Mount Mitoku] was a really difficult hike, too. It was more than a hike. There was a chain on the trail and you just make your way holding onto the chain and really pulling yourself up the rock. There were wooden Buddhist structures and I was wondering, ‘How did people manage to bring these up there 800 years ago? Why did they choose this place in the middle of nowhere?’

[At the summit], the nature is awesome. I would never have dreamed of it, but it’s really beautiful. It’s just very different from what we were used to seeing [traveling elsewhere in Japan]. There’s respect for the mountain. If a tree is growing in a trailway, they don’t pull it out. They build a shrine around it. That’s what struck me about Sanbutsu Temple [and its prayer hall built into a high crevice near Mount Mitoku’s summit].

There’s lots to see in places like Kyoto, of course, but I think it’s more valuable if you’re in this country to go to places like Tottori. It’s a treasure of nature in and of itself.” Ursula Ruh 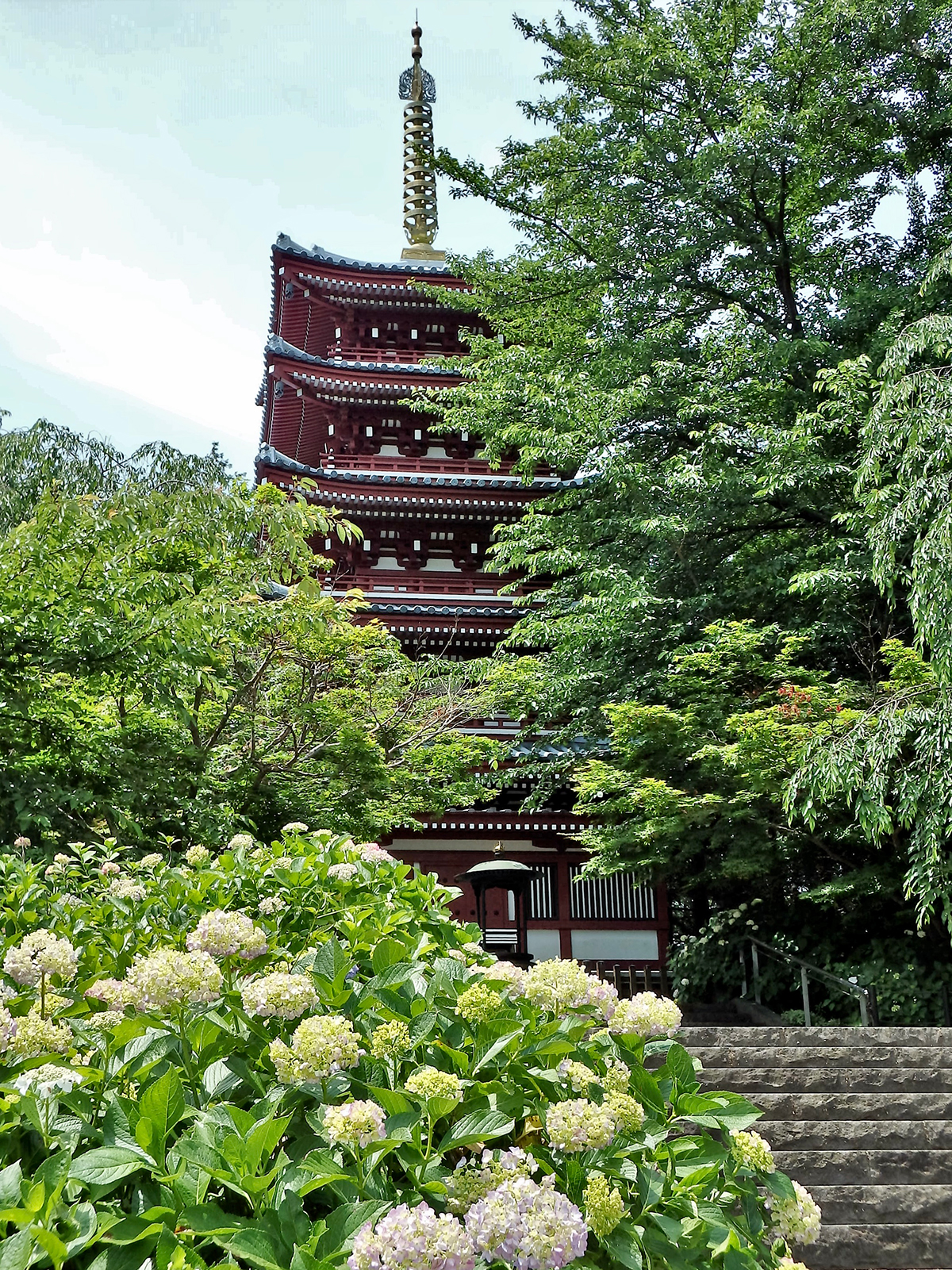 “When you tell somebody, ‘Matsudo, Chiba,’ they imagine more of the south side of Chiba and they think, ‘Oh, it’s so far.’ A lot of foreigners [in Tokyo] don’t really know what they have so close. From Nogizaka Station near Roppongi, you can basically take the Chiyoda Line and in 50 minutes go directly to Kita Kogane, which is the station for Hondo Temple.

The place is beautiful any time, but they have sakura [cherry blossom trees] there, then they have some irises, but Japanese people specifically go there around June because of the beauty and variety of the [more than 50,000] hydrangea flowers. It’s just gorgeous.

There’s also a blueberry farm right on the walkway [to the temple], where you can pick your own blueberries. It’s only ¥400 for a bowl. And there’s a little farmers market there, too, with freshly pickled vegetables. It’s unbelievably cheap compared to Tokyo.

Historically, the whole area used to belong to the Tokugawa clan and it was kind of like their weekend or summer home. In Hondo Temple, the second wife of Tokugawa Ieyasu [the 16th-century unifier of Japan and founder of the Tokugawa shogunate] is [enshrined] there. There’s actually a lot of very significant and important temples that were built here during that time.” Blanka Kobayashi

Connections Tours
Club-organized excursions throughout Tokyo and beyond | Details online