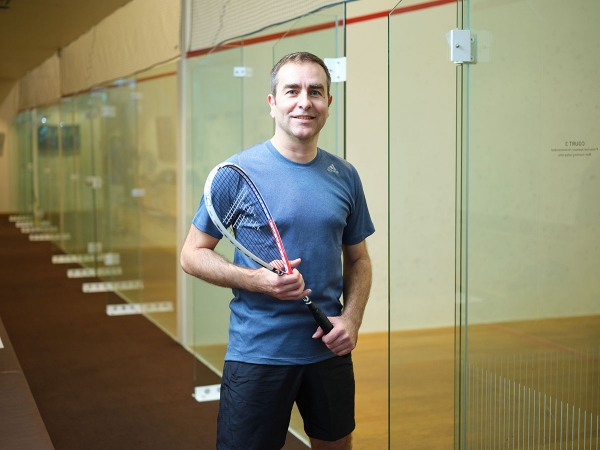 After a 25-year hiatus, Member Stijn Vandervorst is rekindling his passion for squash—while trying to outplay his teenage son.

I was always a volleyball player when I was young. I am from a small village in Belgium and when I went to the city for university at 18, I had to find a new sport. Squash was the one I picked.

I think squash is a sport where you can pretty quickly develop the basics. The big advantage of the sport is whatever your level, you can always find new things to improve on and so have even more fun.

I also do kitesurfing. But before you can have fun with that, you need to go through a long period of learning, failing and eating water. So, compared to that, squash is definitely easier.

I played every week at university, but I stopped completely after I graduated for practical reasons. The first place I lived after university didn’t have a court nearby. I then got into running and biking.

I’m not somebody who is into one particular sport. I tend to adapt to the sport that is the easiest to do in that place. That’s why I rediscovered squash at the Club this year.

I’m also doing some running, biking and swimming, but I like a little bit of competition. And now my son, Arne, who is 15, is at the age where we can have a good game of squash.

At first, I could win because of my experience, which compensated for my reaction speed. But guys of that age learn really quickly. Arne had some lessons with [Club pro] Peter [Amaglio] to learn the basics, and then he became better than me. So I took some lessons to raise my level to keep up.

It’s important for every child of that age to find a sport that they really like. I’m convinced that when you like what you do, it’s easier to continue doing it. It’s like healthy food. If healthy food is tasty, then people will continue eating it.

Playing as a family is another gift. We’ve been playing two to three times a week since the Club reopened. In the beginning, I was really exhausted after 20 minutes because of the intensity of squash. Now I can play again for 45 minutes. There were many things to relearn and it felt like my body was moving with a five-second delay. But after a few months, my brain and body adapted. It’s a lot of fun.

With other sports, I have to push myself a bit to start. With squash, I am more motivated…because of the competitive part. For those people who like a competitive edge, speed and reactivity, squash is a great sport. I feel now I am better than when I was 18 years old, but the progress of Arne is amazing—but that’s being young.

My wife also plays squash. When we were students, we were playing squash together. She also picked it up again, but she is less competitive.

In the case that my son and I are not a good match anymore—meaning he becomes much better than me—I will have to look for another candidate. But currently, it’s nearly a perfect fit because we are improving together.

Learn more about squash at the Club.