My Side of the Mountain 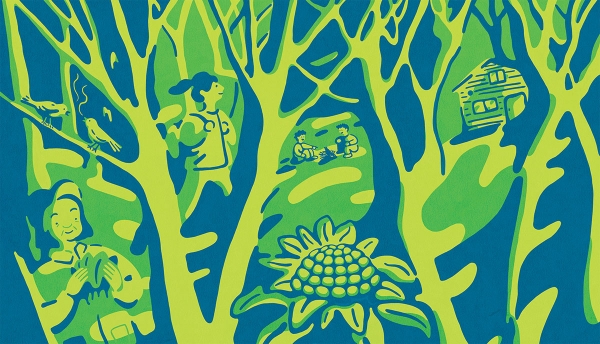 I grew up in a house abutting a state park filled with winding bicycle and horse tracks and meandering rivers and streams.

Each spring, my brother and I would explore the thick forests on the lookout for jack-in-the-pulpits peeking through latent April snows.

My vocabulary of the season was rich in the smells of fresh mud, daffodils and broken robin eggs on footpaths. The green buds on once-barren bushes offered us cover from which to watch—and then chase—passing does and their fawns.

More than two decades since I last watched Mother Nature awaken in all her Technicolor glory, I had the chance to do it again last April. Cooped up in our apartment, feeling an uneasiness not experienced since 2011’s Tohoku earthquake, I thought it would be healthier to escape eerily empty Tokyo and head for the mountains.

With Japanese and international schools temporarily closed, we had installed Wi-Fi throughout our apartment to meet the broadband demands of four children and two working parents. Our two eldest had returned from boarding school in the United States, which meant online classes in the wee hours. A change of environment would be good.

A weeklong reprieve from the Tokyo silence became more than four months among the pristine mountains of Nagano. My youngest brought his best friend from Japanese school for three weeks. We chopped wood for warmth, wandered mountain paths, discovered a bird’s nest fashioned from strands of plastic and trudged through stubborn snow to out-of-the-way hot springs in our sneakers.

Being woken by the warbles and calls of mating birds or by baying, nocturnal foxes was part of our new norm. I struck up friendships with local farmers who showed me where to find edible spring leaves and the rather bitter fukinoto butterbur shoots (best enjoyed as tempura).

I soon obsessed over these spring sprouts scattered on the side of the road. Until, that is, I met a neighbor while out for an afternoon stroll. The farmer offered me some mountain wisdom.

“In the winter, they salt the road and the chemicals and salt seep into the soil,” she said. “Eat the ones farther from the roadside.”

My two feet or a bicycle were my main modes of transportation. On occasion, I rented a car for the day to explore possible cycling routes or to splurge on groceries that exceeded the capacity of my backpack.

As spring gave way to summer, our daily rhythm felt in synch with our Nojiri surroundings. I was working remotely and was not missing Tokyo’s sprawl in the least. I had embraced this luxuriously simple life and I wondered if I would be able to enjoy urban living again.

In September, we left our piece of rural paradise and returned to Tokyo. Surprisingly, it felt energizing to be back among friends, with familiar foods and new places to explore.

What’s changed? Well, we have more plants in our apartment now. Although if the schools ever close again, you know where you’ll find me.