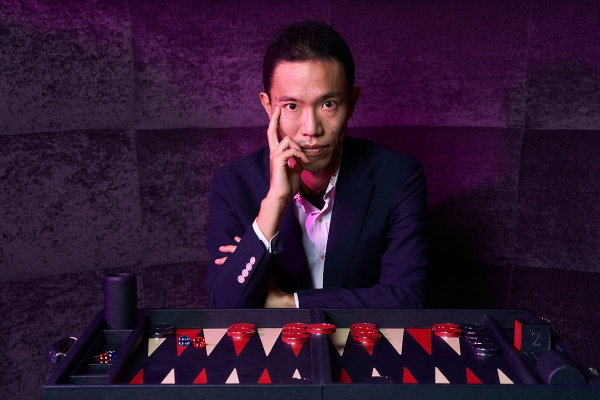 Set to appear at the Club this month, the world’s top-ranked backgammon player talks dice, trophies and lady luck.

Three things refuse to obey my will,” 12th-century Japanese emperor Go-Shirakawa quipped in the seminal war chronicle The Tale of the Heike. “The waters of the Kamo River, the fall of the backgammon dice and the monks of Enryakuji Temple.”

For the emperor, backgammon may have seemed just another uncontrollable force. But for Masayuki Mochizuki, mastering the game has been a matter of practice.

A slender, dark-suited Mochizuki is sharing his thoughts during a November visit to the Club to play with a handful of Members.

Chance plays a large part in any game of backgammon but watching Mochizuki move his chips about the board makes it seem like he has every eventuality figured out.

Since winning the world championship of backgammon in Monte Carlo in 2009, the 41-year-old has been a constant presence among the world’s best players. According to the biannual rankings of Giants of Backgammon, Mochizuki has topped the charts in all but one of the official lists since his 2009 championship.

As the roll of the dice determines both how many chips can be moved and how far, elite-level pattern recognition and an appetite for risk can separate an average player from a great one like Mochizuki.

Fortunately, Members have the chance to learn from the best when Mochizuki hosts a backgammon clinic at the Club on January 25, organized by Members John Koonmen and Alok Rakyan. Lucky rollers will even get the chance to test themselves against the world No 1.

After all, nobody starts at the top. Mochizuki’s own journey began the same year he failed his university entrance exams. With plenty of time on his hands, a friend from his high school shogi chess club introduced him to backgammon.

“Backgammon really just fit in,” says Mochizuki. “Like, ‘Oh, this is my game.’”

After winning Japan’s national championship in 1999, Mochizuki traveled the world to study with the best backgammon players of the time. First came a stint in New York, followed by training with Denmark’s finest. Mochizuki then set his sights on the game’s biggest prize.

“I already knew that I was very high level,” Mochizuki says of his 2009 world championship victory. “That just proved it.”

Nowadays, Mochizuki is biding his time until he can travel to international tournaments again. In the meantime, he’s happy to take requests for exhibition matches—so long as you have the stomach (and wallet) for it.

“I can play smaller stakes,” Mochizuki says, “but I usually play $500 per point.”