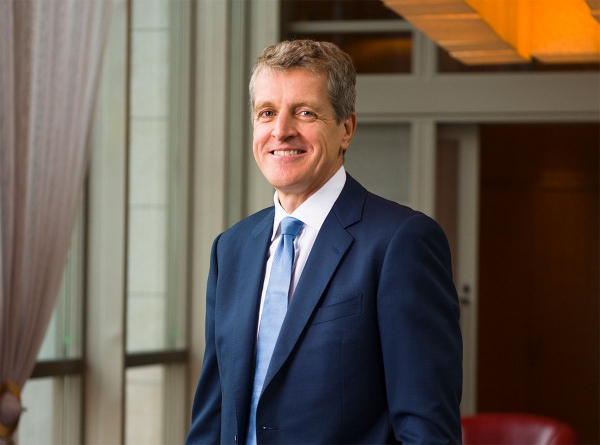 With the Club still reeling from the effects of the pandemic, community leaders prepare for a year of challenges and milestones.

Things were meant to have been different. Drastically different. This month should have seen the Club basking in the success of a momentous 2020.

Memories to last lifetimes should have been forged during the Club’s hosting of Team USA’s Olympic athletes last summer, while the newly opened Nihonbashi Club would have just celebrated its first holiday season.

But a new strain of the coronavirus laid waste to those plans.

With governments around the world imposing lockdowns and states of emergency in an effort to stem the spread of the deadly virus last spring, the Board of Governors decided to temporarily close the Club.

As treasurer and a member of the Board’s executive committee throughout the uncertainty of last year, Michael Benner, 54, knows better than most the impact of the pandemic on Club coffers.

After being selected as the Club’s new representative governor following his reelection to the Board last November, the American discusses the events of 2020 and the path ahead.

INTOUCH: You were Club treasurer a year ago. What kind of shape was the Club in then?

Benner: It depends through which lens you look at things. Obviously, it was a very exciting time in terms of the events that were planned leading into the Olympics and then the expected launch of the Nihonbashi Club. We had built up a lot of social events as well. Under a financial lens, we felt that 2020 would be a good year to revamp some things.

INTOUCH: But then the pandemic hit.

Benner: That brought a whole new set of challenges. The initial estimates were that we would lose upwards of ¥800 million for the year. We were able to significantly reduce that to a more manageable number through a combination of government subsidies, tax deferrals and a better managing of our costs. We ended up in a stronger position in September than we had initially expected to.

INTOUCH: How did the executive committee approach the situation at the beginning of the pandemic?

Benner: It was very difficult to predict anything at that time. First of all, the Board empowered the executive committee to be able to take independent decisions quickly when the Board wasn’t meeting. The committee started meeting regularly to analyze lots of information and plan for possible situations. Our priority was keeping Members and our staff safe. In the end, the Club always needs to be sensitive to the greater society around us and we can’t be seen to be making decisions that run counter to society.

INTOUCH: How tough was it to decide to temporarily close the Club?

Benner: It was a very difficult decision. We had to think about the viability of the Club if we shut down for a period of time. Also, if employees left for their own reasons, that would also impact us. We also had to be sure to provide value to Members in any way we could and revive services as quickly as possible when we reopened. You don’t want to go too draconian and find you can’t rebound quickly.

INTOUCH: Do you think the Board struck the right balance?

Benner: I think we did. The shutdown was perfectly in line with the government guidelines and we reopened quickly. We still did not know how transmittable the disease was and so we erred on the side of safety and then gradually relaxed [measures]. On the whole, the membership has been very supportive and understanding.

INTOUCH: Is there anything you think could have been done better?

Benner: I think some of the communication that we had with Members as we reopened the Club and tested the waters over financial options for the Club’s future could have been more thorough and interactive. It was a very important learning process for us. There was a lot of pent-up emotion that we didn’t fully consider. Based on that, one of the initiatives we will be undertaking this year is a focus on communications and, specifically, digital communications.

INTOUCH: At what point did you become concerned about the possible financial impact of the pandemic on the Club?

Benner: As transmission rates began to pick up in Japan, it became clear that there would be a significant impact on the Club. As a backup procedure, we decided in March to open negotiations with our lender [SMBC].

INTOUCH: The subsequent Board proposal for the Club to take out a line of credit for up to ¥1 billion was narrowly rejected in two votes. How surprised were you by the results?

Benner: We were quite surprised that not everyone could see the benefit of having access to additional cash for worst-case scenarios. A broad team of us had done a lot of work negotiating with SMBC and putting together a structure that was flexible and low-cost. We were not obliged to take out extra debt. As it happens, through Japanese government subsidies, tax deferrals and cost reductions, our position is better, at least in the short term. We put together cost-reduction initiatives for the current financial year and achieved something in the order of ¥600 million in reductions from the 2019 operating budget. Needless to say, though, it is clear that there is no breathing room in that budget and no pockets of cash to draw upon.

INTOUCH: What does this mean for Club services?

Benner: We’re currently operating with reduced services and offerings, which we think are appropriate at this time. Things like the Childcare Center and CHOP Steakhouse have been shut down, but we’re keen to reopen these venues as soon as is prudent. Naturally, we have to balance safety issues with perceived demand. 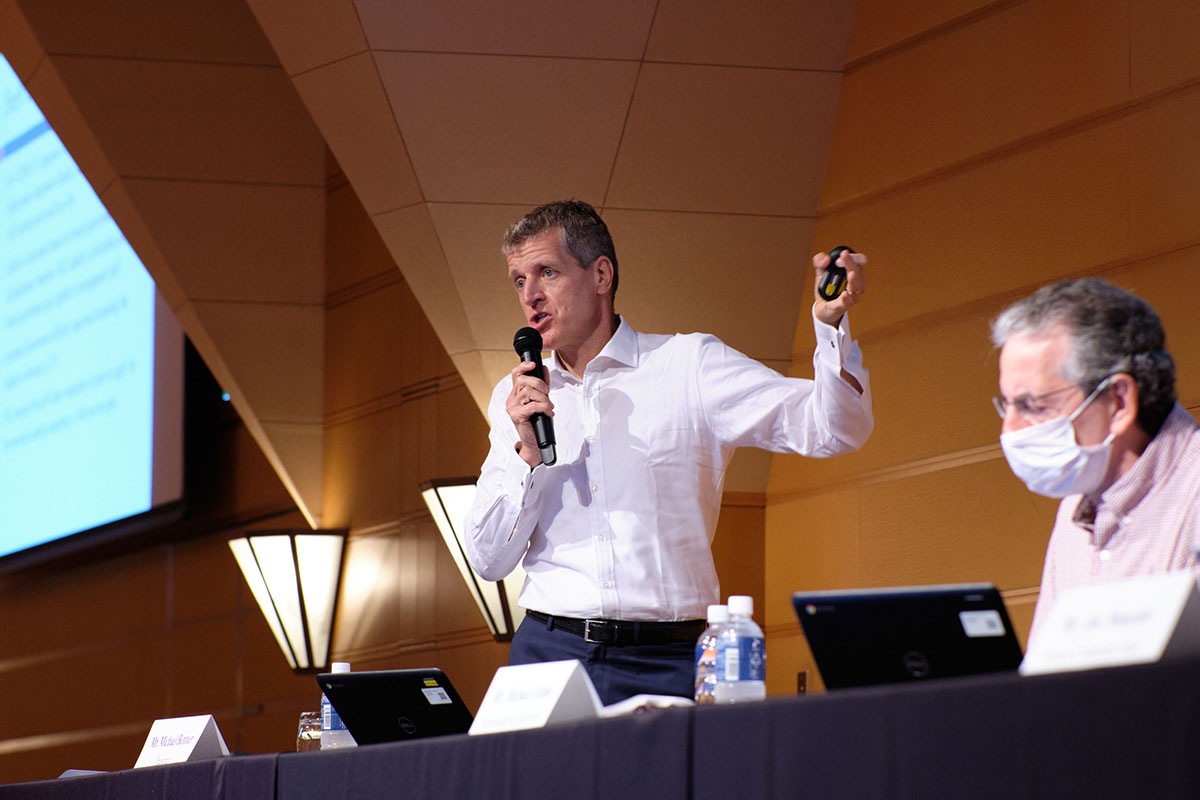 Benner: Interestingly, utilization levels are actually very good. The reports we get show that those levels are above where we were just before the Club closure. We want to get back to offering more programs and events and a fuller dining experience, and we will do these things gradually as the protocols allow us to do so.

INTOUCH: What was highlighted last year was the importance of the Club’s private event and meeting business to the Club’s overall finances. How do you see this business recovering?

Benner: We have forecast the recovery quite conservatively. I believe we’re looking at a 50 percent recovery by the end of this financial year. But I’m quite hopeful that we can do much better than that. As the solutions for the pandemic evolve, we should be in a good position to enjoy those benefits. Right now, we’ve tried to continue the business on a variable-cost basis, marketing the Club as a safe and spacious venue.

INTOUCH: How did last year affect the way you see the Club’s business model?

Benner: We need to take a step back and reevaluate the fundamental principles upon which the Club’s business model is built. For example, the Club’s [private event and meeting] business subsidizes the food and beverage business. While they share some common infrastructure, they are two separate businesses and I believe they should be measured individually. Anyway, we will look at these principles—taking into account the long-term financial requirements of the Club—and create a TAC 2030 vision. In rebuilding the overall financial plan, we need to figure out our funding requirements and determine where that funding should come from. At the same time, we need to operate efficiently and be vigilant of cost management.

INTOUCH: What else will the Board focus on this year?

Benner: Quite critical to this year is the launch of the Nihonbashi Club. That deal is structured extremely well and will be a huge benefit for Members of the Azabudai Club. And we’ll be adding Members to the Club community. The project also created an opportunity for us to distribute our cost structure in a way where we could retain our staff. We’ll be transferring around 50 staff to Nihonbashi, which will significantly reduce our Azabudai operating costs. And as revenues pick up, we can reopen services and perhaps hire additional staff then. Another issue I want to focus on is environmental sustainability. We will launch a task force looking at areas like the Club’s carbon footprint, supply chains and where we source energy. I think this is part of the greater brand that the Club represents.

INTOUCH: The Club was meant to host Team USA as USA House during the now-postponed Tokyo Olympics. What is the situation now?

Benner: We are continuing a dialogue with the [United States Olympic and Paralympic Committee], and if that evolves into a concrete request for the use of this facility in some form, I anticipate it would probably be reduced from the grandiose scale we had originally planned.

INTOUCH: How much of a challenge is this year likely to be?

Benner: There are a lot of unknowns, but we have a very strong Board this year and we have a lot of continuity from 2020, with governors who learned from the year’s experiences. We need to keep an eye on the ball with respect to Covid-19 and steer the Club safely and viably out of the pandemic. For the Board, it’s really about getting the Members excited and enthusiastic to participate for the betterment of the Club, restarting all Club services and initiating new Member experiences. If there is a positive from last year, it’s that it reaffirmed to Members the importance of the Club community in their lives.