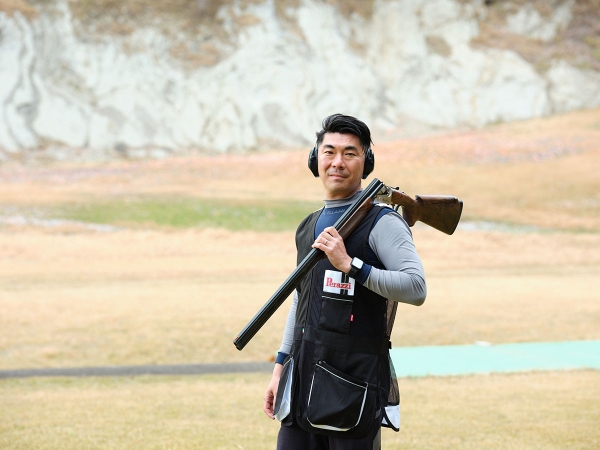 When Tokyo hosts the Olympics this summer, Member Toru Abe will have his eye on one particular sport.

When he craves his favorite meat dish, Toru Abe doesn’t visit his neighborhood butcher. He travels more than 800 kilometers to the wilds of Hokkaido and stalks his prey, rifle in hand. Abe hunts deer to feed his family, an uncommon way of putting food on the table in the modern metropolis of Tokyo.

But Abe is no child of Japan’s backcountry. A Club Member for 13 years, he worked in the finance industry before taking over the family gravestone sales business from his father. His interest in hunting and trap shooting was triggered by Tokyo’s successful 2013 bid to host the (pandemic-postponed) 2020 Olympics.

“I’ve done marathons and triathlons, but these sports become more difficult as one gets older,” says Abe, 47. “I was looking for something that combines mental and physical strength. When the Tokyo Olympics were announced, I was inspired by the images of skeet and trap shooting and decided to try it. I also love cooking, and I love venison and game, so hunting was a natural choice.”

Japan has some of the strictest gun regulations in the world. Pistols, for instance, are banned for all but the police and members of the country’s defense forces. Such stringent laws have meant that Japan has recorded fewer than 10 fatalities from firearms annually in recent years.

Those keen to take up the sport must undergo not only police background checks, including interviews and questions about their motives and mental health, but firearms safety classes and training sessions. When Abe applied for a firearms license, police also questioned his neighbors and associates about his character. The process took about a year. But the controls don’t end there. The police conduct regular home inspections of Abe’s weapons, ammunition and storage locker.

Since receiving his license, Abe has entered a number of competitions for trap shooting, an Olympic discipline where participants have to shoot clay pigeons launched into the air. Training with his double-barreled, 12-gauge Italian shotgun at ranges in Chiba Prefecture, Abe quickly developed his skills and is now ranked as a B-class shooter (A-class shooters include national champions and Olympians).

“I love the moment when I’m concentrating on the clay pigeon,” says Abe. “I hold my breath, empty my mind of thoughts, aim and squeeze the trigger. It’s very much a mental sport.”

Abe puts his marksmanship training to work when he hunts duck in Chiba or Ibaraki or deer in Hokkaido. But it’s not a young person’s pursuit in Japan. With a rapidly graying population, the average age of hunters is 68. Abe has learned a lot from this coterie of experienced outdoorsmen, some of whom share hunting tips online.

In Hokkaido, Abe always hunts with a guide—a wise precaution in bear country—and usually bags two or three deer, which he butchers himself. The meat helps to feed his family for half a year.

“Of course, I don’t like killing any animals, but I hunt only for food,” says Abe. “I’ve tried just about every sport, including baseball and soccer, but I love being in the great outdoors, experiencing the seasons and learning about wildlife. For me, clay shooting is the king of sports and hunting is a part of me.”