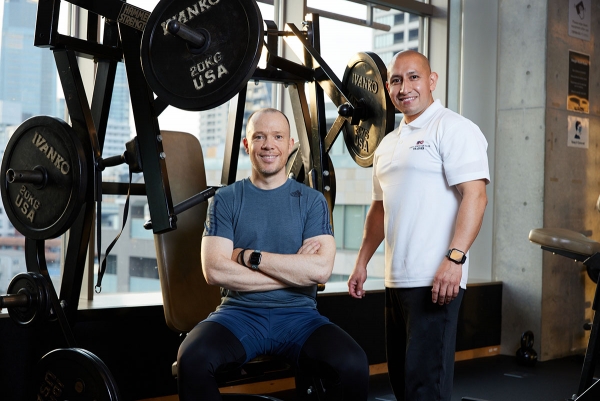 My wife was pushing me to lose some weight. She gave me this voucher for another gym for my 50th birthday. I got through the [Sixpad] course, but I wasn’t keen to continue. Then I thought that the Club’s own gym and a trainer would be the best solution.

Last November, I went in and Luis [Uraga] happened to be working the desk. He explained the system and I thought, “Let’s try it out.” Since then, we have got into the rhythm of a session on the Monday morning before work to set up the week and another on the Friday evening to end it.

Since Luis is a boxer, I figured he must know something about losing weight. Turned out to be true. One time, he had me wrapped up in garbage bags for a workout to lose some extra pounds. A lot of his techniques are from the boxing world, which I think is pretty cool. He always has something up his sleeve to keep you interested and motivated and to benefit you physically.

Right now, we’re doing a combination of weights, the medicine ball, ropes and exercises like pushups or burpees. Luis has given me quite a number of things to do at home like skipping or pushups—things that don’t require a lot of equipment. And once I lost some kilos, running became more enjoyable and easier.

In the beginning, Luis was straight up and said, “A huge part of it is going to be about what you put in your mouth or don’t. Without that, you’re not going to achieve all that much.”

As far as diet goes, the key is the one daily meal replacement with protein powder. I have a shake in the morning, which you need for the training, and less carbs and more vegetables. The good thing is you see the results and it creates a virtuous circle, so you want to hit your goals.

I actually stopped drinking a couple of months ago. It wasn’t a goal at the beginning, but it just sort of happened. The first week was a bit tough, but that’s where the training helps. You’re a little bit more active and you’ve got something else to do to relieve stress and that sort of thing.

I started seeing results from the training quite quickly. In the past when I exercised, I lost 1 or 2 kilos, but with Luis it has been pretty consistent. There were plateaus and stubborn points, but eventually I broke through. I have now lost 15 kilos.

In terms of wellness, I have more energy to play with my son. You also feel a bit better about yourself, and there’s a greater sense of clarity that comes with better sleep.

I think I probably need to find my next goal because we talked about where we wanted to hit in terms of kilos and body fat percentage. And we’re pretty much there. That goal will be important for the next stage.

I think my wife is pretty pleased because she was prodding me to do it. She keeps asking why I don’t have a six-pack, so clearly the bar is rather high, I’m afraid!