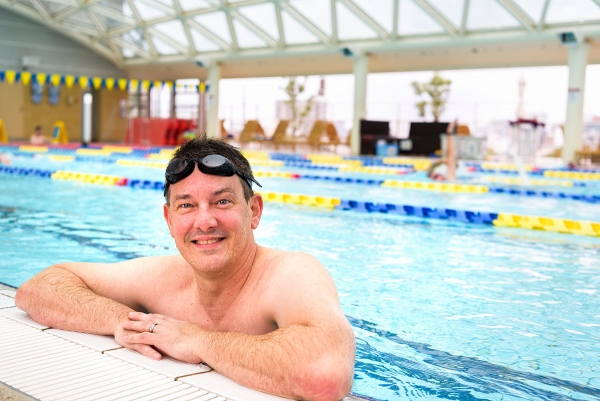 A member of the Sky Pool’s masters swim program, Shane Predeek explains why nothing beats starting the day immersed in water.

Growing up, I played all the sports I could in school, including football, basketball and track and field. I played everything that was available, although swimming wasn’t.

I ended up getting a sports scholarship to play football at Stanford. But it became clear to me after two years that I was never going to be a varsity starting athlete, so I gracefully bowed out.

I came to graduate school in Japan and sought out sports when it was available, but I didn’t do a whole lot for the first 10 years. I joined the Club in 1997 and was using the facilities to exercise. I was running a lot as well. I ended up having a hip injury and started to look for sports that were easier on the body.

I joined the masters swim program at the temporary facility in Takanawa about 13 years ago. My original intention was to rehabilitate myself, but I got in the pool and loved it. I started by learning the strokes and just kept going. Since then, I’ve been swimming three or four times a week.

Any time you learn a new sport, it’s a completely different muscle memory activity. It was tough to keep up with the rest of the group at first, and it took about six months to get my footing. The fitness itself was fine, but swimming is a lot of form and the accumulation of a lot of little movements. Even to this day, I’m taking swim clinics.

I’m not the best swimmer in the program, but I’ve come a long way. I never thought I would be as good as I’ve become, but I’m still not as good as the swimmers who swam when they were young.

I didn’t anticipate this when I joined, but one of the appeals is the swim community. If you don’t show up, they’re asking where you are. Quite frankly, they’ve all become lifelong friends, and we do our best to recruit new swimmers.

For that one hour in the pool, it’s a meditation session of sorts. I think mentally swimming is a really healthy sport. You have to learn how to deal with yourself. To a certain degree, you can switch off and let your body do its thing.

I’m also a huge fan of yoga and weight training, and that combination with swimming is a really good way to keep the body and mind in shape. I do swimming the most, with one or two yoga sessions at home with a teacher each week and two sessions of weight training a week. I’m an evangelist for this combination and have converted some people.

I would never underestimate the routine that is required to do swimming. I start my day off with a very disciplined, healthy activity and that carries me through the day. It also forces me to go home at a decent hour and get a good night’s sleep. If I don’t, it’s going to be pretty painful.

The lessons of swimming are very applicable to life: there are a lot of little actions that you have to bring together. I think that kind of philosophy has benefited me outside the pool.