Help and Hand-Ups for Tokyo's Homeless 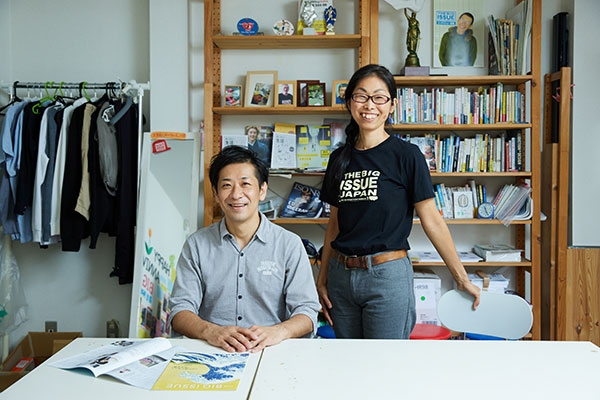 Sanyukai and the Big Issue are two Club-supported charities both dedicated to helping Tokyo’s homeless and destitute.

Traffic rumbles through the web of streets around Ikebukuro Station. Commuters stream toward the station’s myriad entrances that lead to their early-hour trains.

Tatsuo Ozaki stands at the top of one entrance staircase. He holds aloft the newest edition of the Big Issue magazine, a steely-eyed Daniel Craig as the world’s most famous secret agent, 007, on its cover.

A copy costs just ¥450, but few in the passing crowd give the magazine, or the man holding it, much notice.

“I’ve been selling the Big Issue for about 18 years now,” says a masked Ozaki, 69. “Because of the pandemic, it’s never been as hard to sell as it is now.” 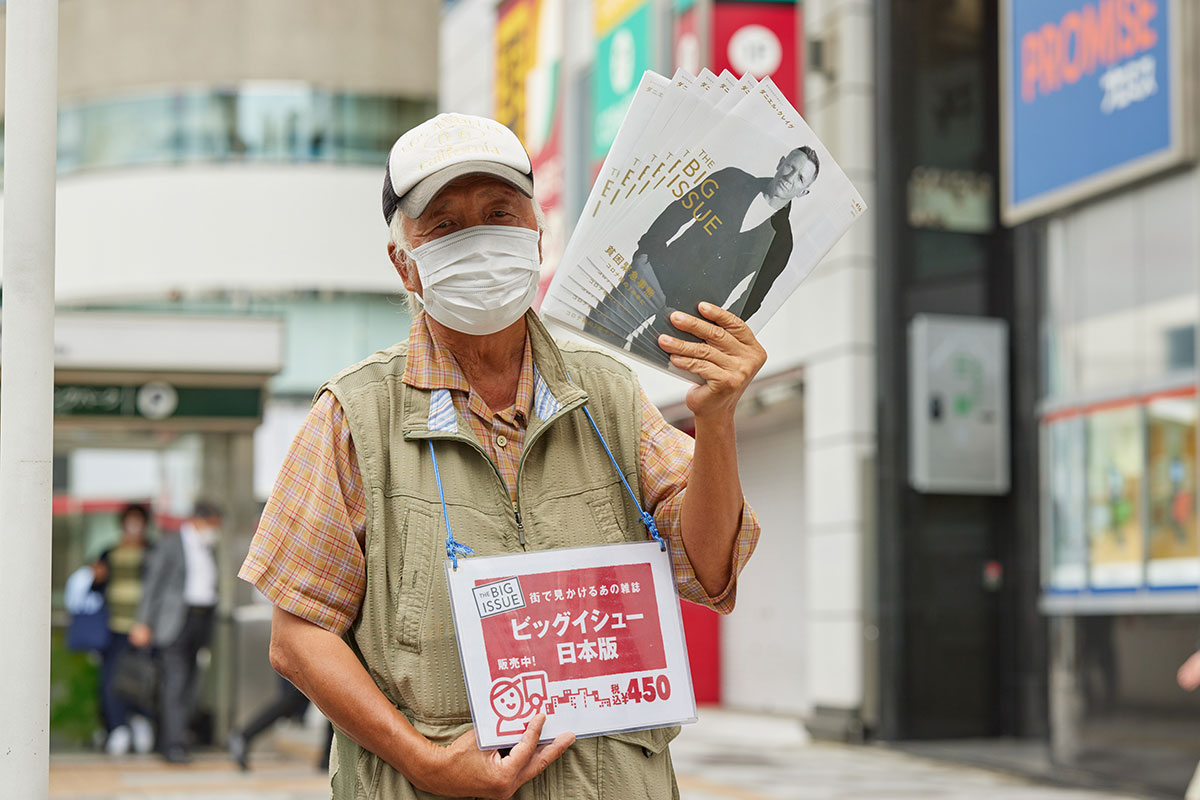 Originally from Ehime Prefecture, Ozaki worked in restaurants for much of his life, but a string of bad luck in the early 2000s saw him lose his last full-time job as manager of a yakiniku barbecue restaurant. Without an income and with little savings on which to draw, Ozaki started sleeping rough—sometimes in Internet cafés, other times on the street.

When the Big Issue launched in Japan in 2003, Ozaki was one of the first to sign up as a vendor. While he still has no permanent place to call home, he does have money to feed and clothe himself.

“Doing this so long, I’ve actually met a lot of people,” he says. “I have regular customers who come and chat when they can. It’s nice when they stop by.”

Such spontaneous interactions may not be what comes to mind when many people think about support for the homeless, but it’s a core tenet of the Big Issue’s mission. It’s even codified in the organization’s slogan: “Help the homeless to help themselves.”

“Strictly speaking, we’re not a charity,” says Miku Sano, director of the Big Issue’s Tokyo office. “We want to empower people however we can.”

Started in the UK in 1991, the Big Issue operates on a simple model. Homeless vendors are given 10 free copies of the bimonthly magazine to sell, with proceeds from each issue to spend or save as they see fit. After that, Japanese vendors can purchase as many extra copies as they like for ¥220.

At that rate, Sano explains, 20 copies sold during the day is enough for a vendor to put a roof over their head for the night.

“By turning a profit and saving money where they can, our vendors can gradually stop sleeping on the street, find a place to stay and hopefully rent an apartment and find permanent employment,” says Sano, 51, highlighting the dilemma facing many homeless who often need to provide a permanent address when applying for a job. 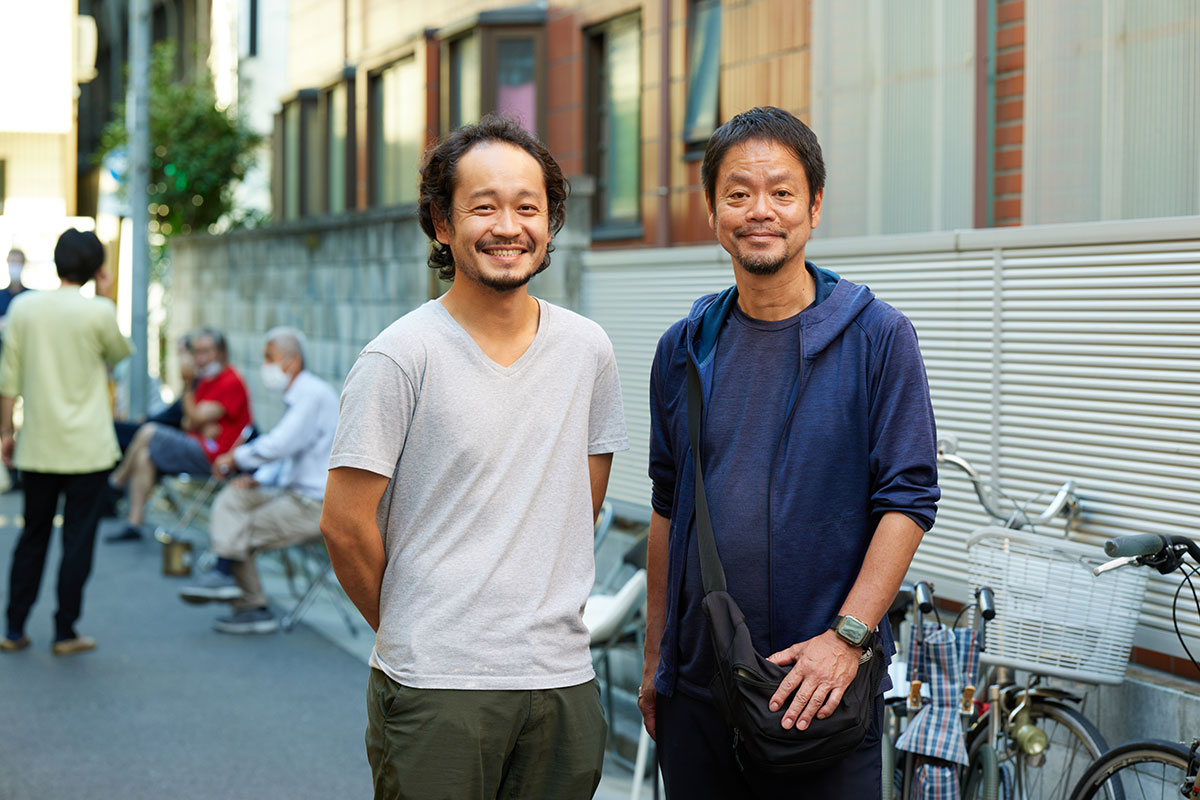 Solving homelessness in Tokyo for good first requires grasping the true scale of the issue. A government report from earlier this year put the number of homeless in the whole of Japan at 3,824, while a separate government agency claimed that around 382 were sleeping rough in the capital.

“One big problem with these reports is that the government performs its counts during the day,” she says. “Many homeless people don’t stay in the same location throughout the day, so they won’t be there when government officials come by. And that doesn’t even begin to include all those who sleep in different Internet cafés every night.”

In 2019, the grassroots Advocacy and Research Center for Homelessness (ARCH) performed its own midnight count of homeless in several Tokyo wards. ARCH’s volunteers found nearly three times as many people living on the streets than official figures.

In the runup to Tokyo’s recent Olympic Games, many of the city’s homeless found themselves evicted from areas near sporting venues, while some parks were locked at night to discourage people from sleeping there.

“It’s of course a big problem, and there’s no one easy solution,” says Hideaki Kizu, 43, a social worker working out of the Big Issue’s Tokyo office, which has about 40 regular vendors on its register. “But at least there’s a path forward for the vendors that we work with. At least we can tell them: ‘Things can get better.’”

That same sentiment initially drove Member Lina Tanaka-Raffone to wonder if the Club could be doing more to help Tokyo’s homeless community.

“I used to live in London, so that’s how I got to know about the Big Issue,” says Tanaka-Raffone, a member of Connections’ charities committee. “Japan normally has plenty of ‘safety nets’ to help people that fall on hard times, but with the Covid-19 pandemic, it felt like a good time for the Club to get involved.”

Thanks to Tanaka-Raffone and a ¥500,000 donation from Connections, the Big Issue is among eleven local charities supported by the Club this year.

“Self-responsibility is such an important concept in Japanese culture,” Tanaka-Raffone explains. “I’m very glad the Club is now supporting an organization that helps the less fortunate regain that sense of themselves.”

Sometimes, all it takes is a helping hand to turn a life around. Since 1984, that’s been Sanyukai founder Jean Le Beau’s guiding belief. 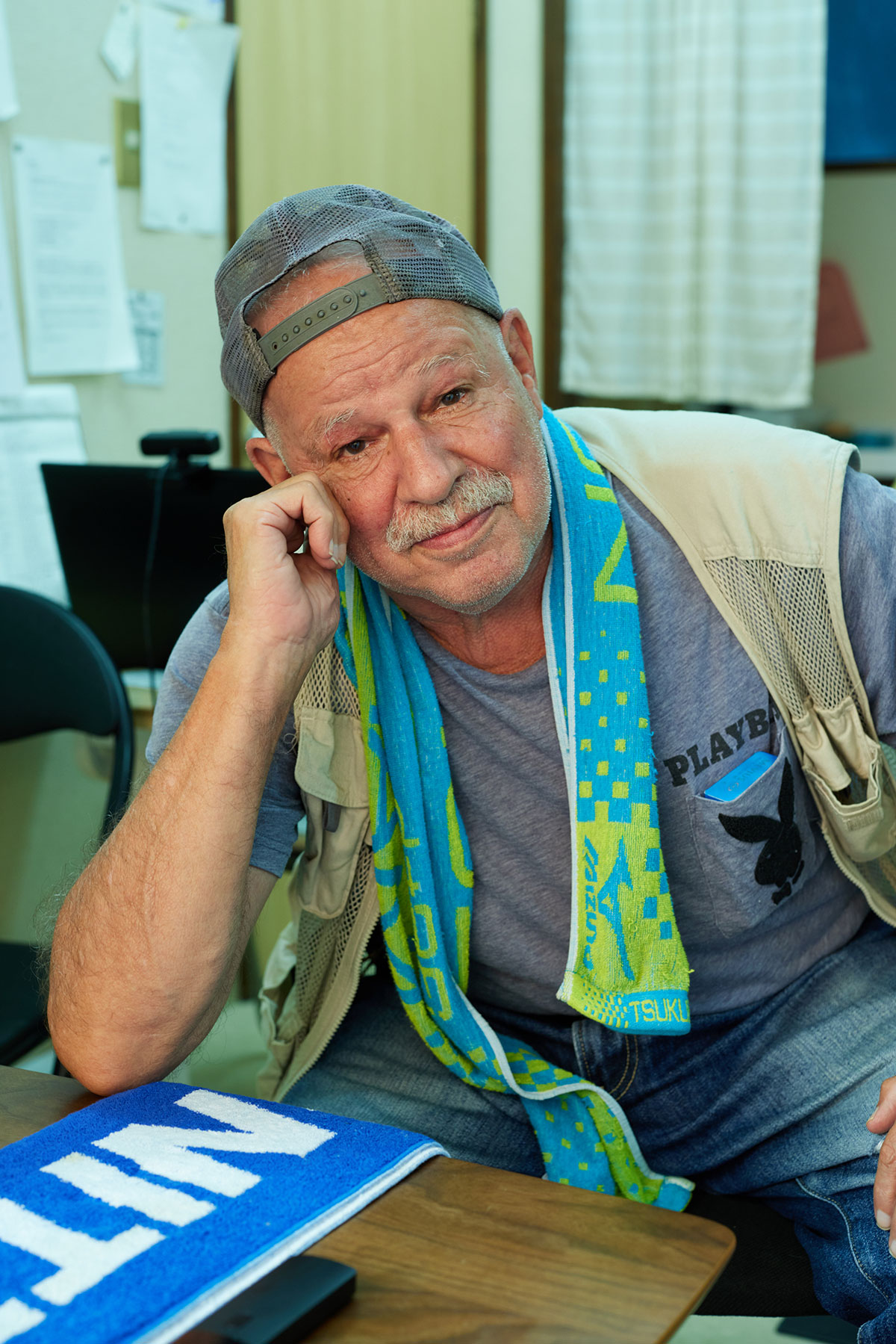 “The mood around here was pretty dark when we first started,” explains Le Beau, 76, a one-time missionary and transplanted Quebecois, of the transformation he’s witnessed over the years in the northeast Tokyo district once known as Sanya. “Nobody believed things could be better. But bit by bit, we started seeing smiles come back to the neighborhood.”

As Le Beau speaks, the dozen men in their 60s and 70s lined up in the alley outside the center trade jokes and share stories with one another. Occasionally, there’s an eruption of laughter. As they wait to be called into the free clinic Sanyukai regularly runs, the men—many of them homeless and all of them either unemployed or struggling to make ends meet—share moments of levity.

It may seem unremarkable to some, but it’s exactly that atmosphere of normalcy that Sanyukai has worked to create over decades of supporting those with nowhere left to turn.

“We’re always ready to listen to anyone who suddenly can’t pay rent or hasn’t been able to find a job for a while,” says Masaru Goto, 55, a counselor with Sanyukai. “After [Covid-19] shut things down, we even saw a few people in their 20s and 30s turn to us because they were so worried about what to do next.” 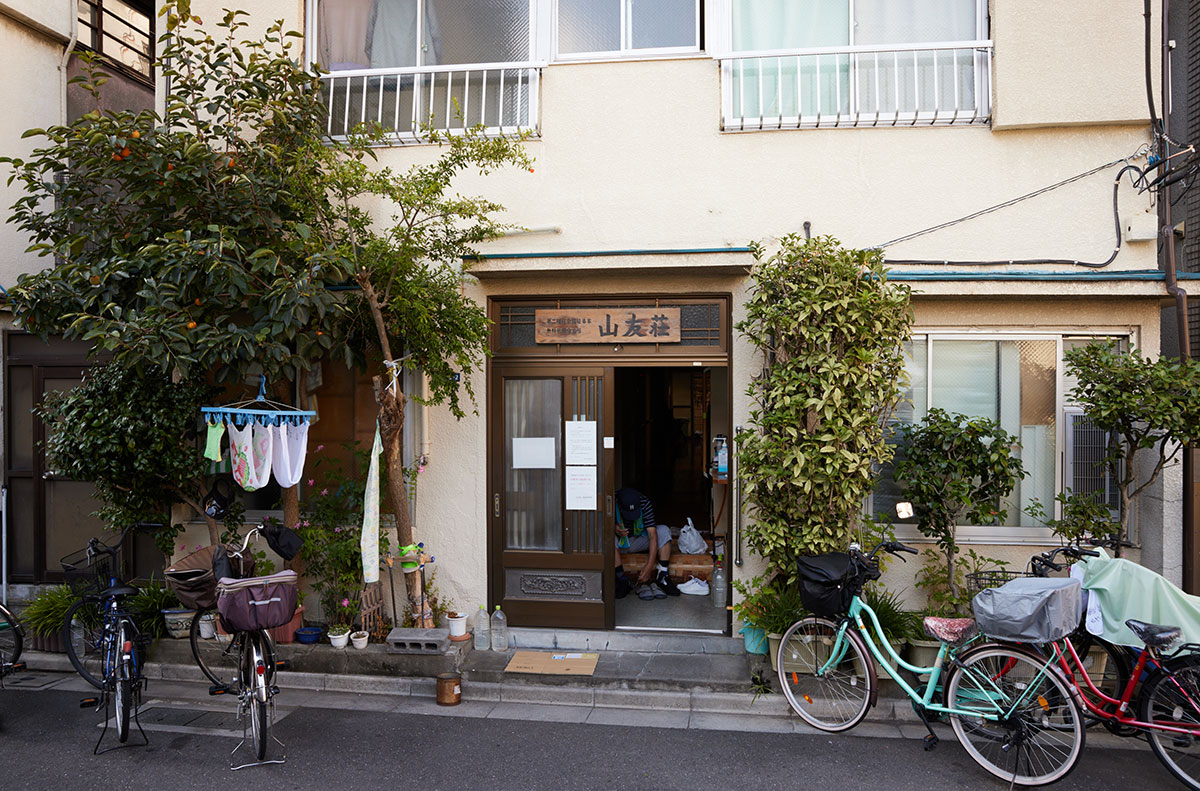 Sanyukai’s services are made possible by donations like Connections’ ¥500,000 this year. And as part of a long-standing relationship with Sanyukai, Connections collects much-needed food and household items for the nonprofit each November.

Kazunori Yui, Sanyukai’s co-director, explains that the center offers help to those who fall through society’s cracks, whether it’s through free medical examinations, weekly lunchboxes for those sleeping rough along the nearby Sumida River, counseling sessions or just a place to hang out and talk with friends.

“These guys are so often misunderstood, I think,” explains Yui, 37, sitting in the center. “It’s never just one thing that drives someone into homelessness. It’s a string of hardships and misfortune that leads them to this kind of lifestyle. Anything we can do to help and break that pattern is a good thing.”

Outside, the chatter and laughter continue. 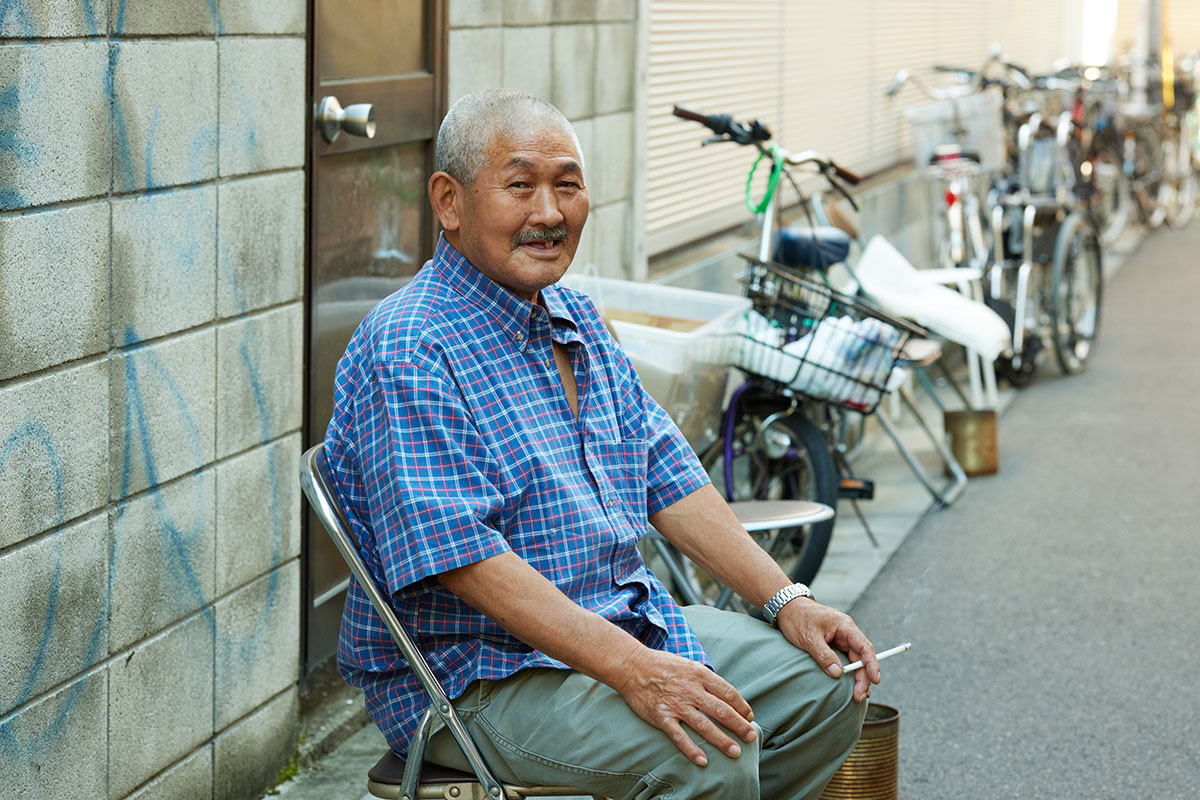 “I come here pretty much every day just to chat with everybody,” says Tokio Sateyama, a regular face at Sanyukai. “I don’t have any living relatives, so it’s nice to have the people here. “

Originally from Iwate Prefecture, Sateyama, 67, first came to Tokyo in search of work as a day laborer in 1989. Eventually, when Japan’s roaring, bubble-era economy began to stagnate, the work dried up. The years of privation that followed left him weathered and wizened.

Today, Sateyama manages to rent an inexpensive apartment nearby. But it’s a sense of belonging that draws him to Sanyukai each day.

“[Without Sanyukai,] I’d spend my time just pacing up and down the river,” says Sateyama. “This is an important place to me.”