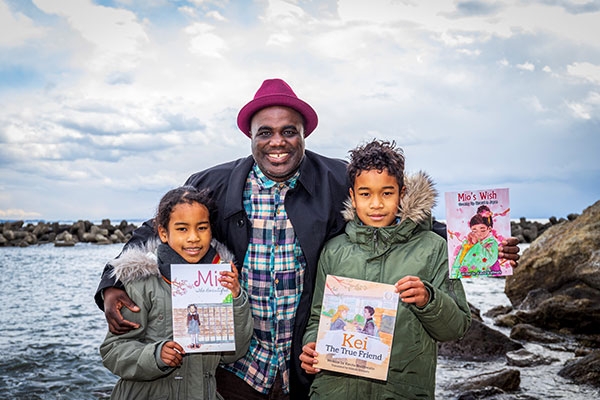 Set to speak at two Club events this month, Kinota Braithwaite discusses his fight to change attitudes about race in Japan.

Like any first-grader starting school, Mio Braithwaite was excited to meet her teacher and make new friends. But those early feelings of nervous delight soon turned to anguish. When other kids at her elementary school in Kanagawa Prefecture directed racist barbs at her, Mio told her parents she didn’t want to go back.

Surprisingly, Mio’s father, Kinota Braithwaite, saw an opportunity. The Canadian educator arranged to give a talk about racism at the school and even had a parent of one of the bullies do the interpretation. His message is crystallized in Mio The Beautiful, an exquisitely illustrated, bilingual children’s book.

“I’ve done a lot of anti-bullying work before, speaking to kids and parents, but nothing prepares you for when it’s your actual child who is going through it,” says Braithwaite, 43. “I was quite upset, but I knew that if I did the same thing as the bullies, then we were not going to get a positive result. I had to show my daughter there’s a better way to deal with the problem.”

Published a year ago, Mio The Beautiful tells the story of how the parents and teacher of a young girl taunted by her peers rally to spread a message of racial awareness and acceptance. Since the book’s release, Braithwaite has received messages from other parents in Japan sharing the struggles of their own biracial children.

Born and raised in Toronto, Braithwaite follows in the footsteps of his late grandmother in writing about racial issues. Rella Aylestock Braithwaite, a descendant of Black pioneers, including former slaves from the United States who settled in Ontario, wrote newspaper columns about African Canadians as well as the 1975 book The Black Woman in Canada.

With the Black Lives Matter movement shining a light on racial inequality across the world, the issues of discrimination and identity in Japan have been drawing greater attention, too, with Nike Japan releasing a provocative commercial on the subject in 2020.

“People here are in their little bubble and want things to stay the same, but I want my kids to feel accepted, too, and be part of Japanese society,” says Braithwaite, who teaches at the Montessori School of Tokyo. “Everyone likes a winner, so when they see someone of mixed heritage representing Japan, it’s a positive. This has also been good for kids, because now they can see someone in Japanese society who looks like them. When [biracial tennis player] Naomi Osaka carried the [Tokyo Olympic] torch, it meant a lot for my kids.”

The success of the Sakura Medal-nominated Mio The Beautiful has led to Braithwaite speaking at schools and companies. He has since published Kei The True Friend, about the difficulties his son faced after moving to Japan from Canada, and Mio’s Wish: Growing Up Biracial in Japan.

“My whole motivation is that I don’t want any child to be bullied or to be afraid,” says Braithwaite. “Hopefully, one day I won’t have to write these books anymore.”