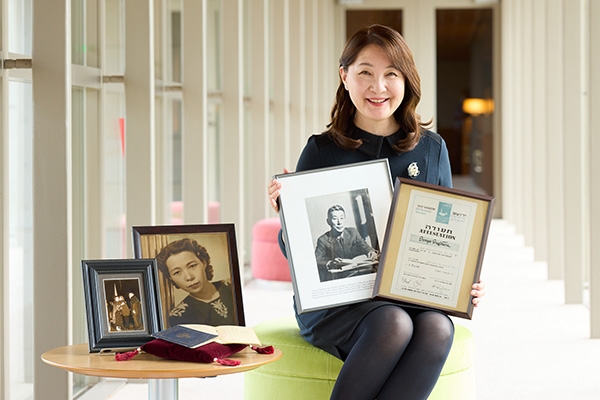 When the diplomat Chiune Sugihara returned to Japan in 1947 after 18 months in a Soviet internment camp, he reported for work at Japan’s foreign ministry in Tokyo. But he received a less-than-enthusiastic welcome and was quietly given a small severance payment and forgotten.

The Waseda graduate was forced to sell light bulbs door-to-door to support his family. It was a lamentable fate for a man who had saved thousands of Jews during World War II.

As Japan’s vice-consul in Kaunas, Lithuania, Sugihara was alarmed by the plight of Jewish refugees who had fled Nazi persecution in Poland for Soviet-controlled Lithuania. During the summer of 1940, ignoring government orders, he issued nearly 3,500 transit visas to Jewish families, allowing them to travel through Japanese territory. Even after the consulate was closed, he continued his work at his hotel.

Less than a year later, Germany invaded Lithuania. Under Nazi occupation, the country suffered one of the highest rates of slaughter of Jews in the Holocaust.

Eventually settling in Kamakura, Sugihara remained virtually unknown in his home country. It was only in 1984, shortly before his death, that Israel’s Yad Vashem Holocaust memorial center bestowed upon him the title of Righteous Among Nations. There are now memorials in his name in various countries, in part because of the history handed down by his beneficiaries as well as his own descendants. The Japanese government finally acknowledged his humanitarian efforts with a plaque at the diplomatic record office in 2000.

Madoka Sugihara says her grandfather never spoke about his risky undertakings. She only learned about his acts after her grandmother, Yukiko, published a book about them. While he was a Christian (he was quoted as saying that to have abandoned people would have been “disobeying God”), Madoka feels that he was naturally altruistic.

“My grandfather’s faith was a big part of it, but he also had a strong sense of justice and great determination,” she says. “This was especially due to his experience seeing how Japanese soldiers behaved toward locals in Manchuria when he was stationed there. He became unable to tolerate injustice, especially racial discrimination. When Jewish people were standing at his door asking for help, he decided that he would be the one to help.”

Madoka realized the significance of what her grandfather had done when she began meeting survivors or their descendants, who now number more than 100,000. They would welcome her warmly, often breaking into tears when talking about the transit visas. She began giving presentations about his life and now helps lead the nonprofit organization Chiune Sugihara: Visas for Life.

This month, Madoka will discuss her grandfather’s legacy at a TAC Talk and read from her father’s book, Puppe’s Story, about his time as a young boy in Lithuania, at a special event for kids. Her appearance at the Club comes at a time of renewed conflict in Europe.

“I hope my talk will inspire people and raise awareness to be open-minded and look around at what’s going on in the world, especially with Russia and Ukraine,” she says. “I’ve learned that a lot of young people are helping others. And I hope that after so many decades, my grandfather can still be a role model for people to step up and render aid.”