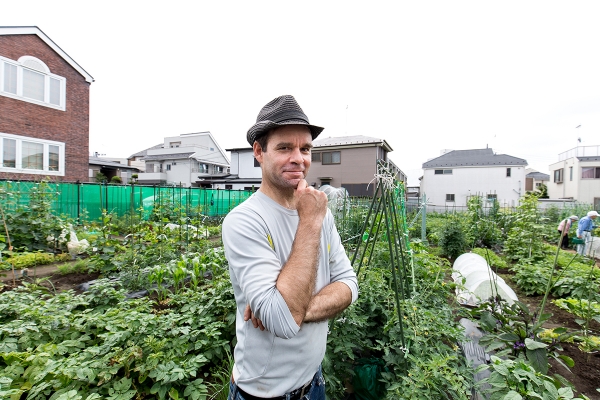 Set to teach urban farming at the Club this fall, Jonathon Walsh explains the beneﬁts of getting your hands dirty.

A few weeks before the devastating earthquake and tsunami struck northern Japan in 2011, the New Zealand city of Christchurch was rocked by a 6.3-magnitude quake that left 185 people dead. The cataclysms proved transformational for Kiwi and longtime Japan resident Jonathon Walsh.

Convinced that Tokyo would be hit by food shortages in the event of a major earthquake, he decided to start growing his own produce. Walsh, who is a business writer and editor by trade, has become consumed with encouraging people to try organic urban farming.

“The main goal is to boost food self-sufficiency and also to cut down on food production-related pollution,” says Walsh, 44. “Most of the food that we buy from supermarkets has been sprayed with pesticides and preservatives to keep it fresh. I want to cut down on the chemicals my family consumes through food. The simple way to do that is to grow food myself without chemicals.”

Walsh began urban farming in 2012. He rents a 15-square-meter plot (a little bigger than a standard parking spot) in a community garden near his home in Tokyo’s Itabashi. He fertilizes the garden with liquid compost and uses netting to keep away insects.

In one summer, Walsh can grow up to 1,800 mini tomatoes and 400 cucumbers—too much for his own family, so he gives some away. He also grows lettuce, spinach, herbs, komatsuna (Japanese mustard spinach) and mizuna (Japanese greens).

Aside from the health benefits, an urban farm can be a money saver. The annual rent for the garden is ¥5,500, and Walsh believes it would cost up to 10 times that to buy the equivalent produce at a supermarket.

Walsh’s company, Business Grow, has been working with Tokyo International School for four years. He has taught hundreds of kids how to cultivate almost any sunlit area, and he has held workshops on raised gardens and transforming discarded 2-liter plastic bottles into planters to hang on the schoolyard fence.

“The kids are learning food-production skills that their grandparents’ generation took for granted,” he says.

Walsh, who set up a rooftop garden for the manager of a building in Tokyo’s Ginza shopping district (the plot has yielded an array of salad ingredients), says the city’s flat rooftops hold great potential as urban farms and he wants to demonstrate this to more businesses and schools.

From September, Walsh will teach the essentials of organic urban farming as part of the Women’s Group’s fall semester of enrichment programs.

“Cities like Tokyo could massively increase their food production and this can also help the food needs of homeless people,” says Walsh, who has supported local charity Second Harvest Japan. “For people who are interested in organic food, growing your own produce without chemicals is the closest you’ll get. And it’s really cheap and really fun.”