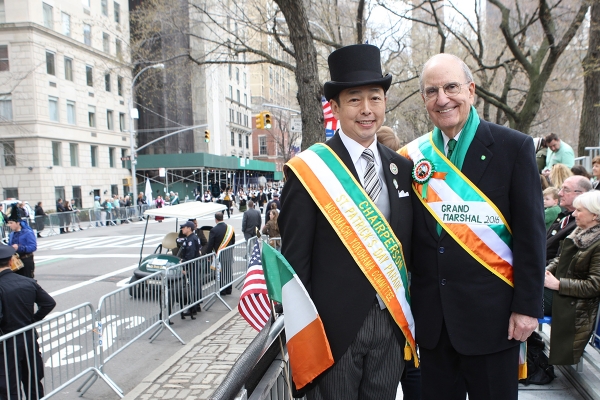 Ahead of St Patrick’s Day on March 17, one Member explains his devotion to the Emerald Isle.

It all started with an ad in the newspaper. Hideki Mimura, the son of a Yokohama potato farmer, was perusing The Japan Times in 1990, when something caught his eye in the classifieds.

“The Irish were looking for volunteers for the Expo in Osaka,” Mimura, 55, says at his small farm, where he is the 10th generation in his family to work the land. “Escaping Yokohama for six months was interesting to me at that time.”

“I told [the organizers] I could drive a big truck or help with anything,” he recalls over coffee in a sun-filled room in his traditional farmhouse. “Soon after, I was made a special project coordinator.”

And so began a relationship with Ireland and Japan’s Irish community that would only deepen and inextricably weave itself into the Mimura family over the following 27 years.

Mimura eventually worked at the Irish Embassy and helped establish events around Japan, including St Patrick’s Day parades in Tokyo and Yokohama. During the first parade in the capital in 1992, he says about 100 Irish and Hibernophiles carried homemade banners along a road in Roppongi. Asia’s oldest and largest St Patrick’s Day parade, it is held each March in Omotesando, with nearly 1,500 people participating, including bands, dance groups and leprechaun-costumed revelers.

Parades, Mimura says, have a great appeal. “Showing people having fun is the best way to get people interested in a natural way, and it’s working,” he says. There are now 14 parades around Japan, with Fukui joining the list last year.

Nowadays, farming occurs around Mimura’s annual trips to New York City, where he takes part in what is the world’s largest St Patrick’s Day parade, and regular visits to Ireland. He says he feels an affinity for the country’s respect for tradition.

The Irish government recently recognized Mimura’s community efforts and presented him with the 2017 Presidential Distinguished Service Award for the Irish Abroad at a ceremony with Irish President Michael Higgins in Dublin. “This award really helped a lot,” he says softly. “It was a point of light in a very dark year.”

In April 2017, his elder daughter, Melissa, was killed in a traffic accident in Canada. He learned of the award on what would have been Melissa’s 22nd birthday. A gift from his daughter is how he describes the honor. “It was her way of encouraging us to keep going,” says Mimura, his eyes glistening with tears.

And that’s exactly what he’s doing. While Mimura has retired from organizing Tokyo’s annual parade, he will be its grand marshal this year, and he is putting the finishing touches to the Yokohama parade. “I try to help however I can,” he says, echoing the offer he first made in Osaka nearly three decades ago.