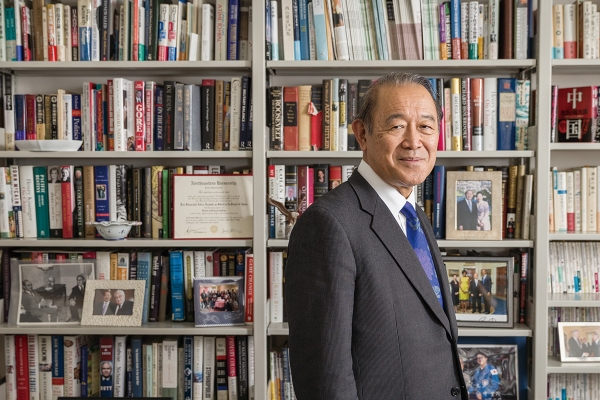 It was just a few hours since tsunami waves triggered by a massive 9.0 magnitude earthquake had slammed into Japan’s northeast coastline, and Ichiro Fujisaki was sitting through a commercial break under the bright lights of a CNN studio in Washington, DC.

The American network’s veteran host Wolf Blitzer had just given Japan’s ambassador to the United States five minutes to explain to the world whether a meltdown had occurred at a crippled nuclear power plant on Fukushima’s Pacific coast.

“At that time, the government in Tokyo was not functioning as it should have been. We were not getting sufficient information,” says Fujisaki of the aftermath of the triple disaster in March 2011. “I just had to say that there was no evidence of a [meltdown].”

In fact, thousands of kilometers away, the situation at Tokyo Electric Power’s Fukushima No 1 nuclear plant was far from stable.

Sitting in his 16th-floor office at Sophia University, where, until last December, he held the position of distinguished
professor, Fujisaki reflects on those uncertain early days of the world’s worst nuclear disaster since Chernobyl in 1986.

He assembled a team of embassy officials from every Japanese government department. With little sleep, they formulated a cohesive communications plan and Fujisaki began exhaustively researching the technicalities of nuclear reactors.

When radioactive debris from Japan began washing ashore in California and Alaska nine months later, Tokyo, citing international law, said the cleanup was not its responsibility.

“I said, ‘Can we say that to Americans who helped us so much less than a year ago?’” says Fujisaki, 70, whose bookshelves are lined with political autobiographies inscribed with personal messages from the likes of former US President George W Bush and Hillary Clinton, who was secretary of state during Fujisaki’s time in the capital. “That’s not possible or honorable.”

Some officials in the prime minister’s office shared Fujisaki’s view. Ultimately, Japan donated $1 million to each of the five US states affected, as well as to Canada.

Fujisaki was also instrumental in establishing the Taylor Anderson Memorial Fund, a Japanese nonprofit set up in memory of the 24-year-old English teacher from Virginia who perished in the Miyagi city of Ishinomaki.

“[Fujisaki’s] knowledge and vision have made it possible for the [fund] to continue to help students, families and schools recover, and continue to build bridges between our two countries,” says Taylor’s father, Andy Anderson, who serves as co-president of the fund, alongside Fujisaki.

This month, in recognition of Fujisaki’s years of service in support of US-Japan relations, as part of a career spanning more than four decades, the Club presents him with its Distinguished Achievement Award.

“Ambassador Fujisaki has dedicated his life to promoting international relations among countries,” says Jeff McNeill, a member of the Club’s award selection committee. “He is a wonderful role model for the younger generation in a world where communication is becoming increasingly globalized.”

Established in 1995, the Distinguished Achievement Award honors individuals who have made contributions to improving society and international relations, especially between the US and Japan. Past recipients include Japanese astronaut Koichi Wakata, American scholar of Japanese literature Edward Seidensticker and Sadako Ogata, the former United Nations high commissioner for refugees.

Fujisaki has diplomacy in his blood. His father, a Kagoshima native and Tokyo University grad, served as ambassador to Thailand and the Netherlands before becoming a supreme court justice.

A framed photo of his father in discussion with former US Secretary of State Henry Kissinger sits in Fujisaki’s office. Next to it is a picture of himself with a much older Kissinger, whom Fujisaki admonished for keeping his 1971 China visit (which paved the way for President Richard Nixon’s trip the following year) secret.

“I said to Dr Kissinger, ‘It is an institutional memory that we cannot foster trust relations, very frankly, if you do those things,’” says Fujisaki. “At Christmas or birthdays, there are good surprises. In bilateral relations, there is no good surprise.”

Fujisaki’s mother’s side of the family is made up of influential public figures, too, including Hirobumi Ito, who studied at university in London before becoming Japan’s first prime minister in 1885.

Fujisaki rummages through a box in his office and unearths a framed poem Ito wrote when he announced Japan’s first electric streetcar in the late 1890s. “‘The world has changed,’” Fujisaki reads from the scroll. “‘Now lightning can move locomotives.’”

Born in 1947, Fujisaki grew up in post-World War II Tokyo. When his father was Japan’s consulate general in Seattle, the young Fujisaki was transfixed by modern American society, with its luxuries like ice cream and soda.

While attending Tokyo’s Keio University, he passed the foreign ministry entrance exam and became a bureaucrat in 1969. He says he never considered any other career. “There could have been a wiser choice, but I wanted to serve [the] government,” he says.

Fujisaki’s experience in Seattle inspired him to study English, and the ministry sent him to Brown University and graduate school at Stanford. Postings to Jakarta, Paris and London followed.

By 1994, he was deputy director general in the ministry’s Asian affairs bureau. Club Member Kazuyuki Yamazaki, who is now senior deputy minister for foreign affairs, worked under Fujisaki at that time.

“He looked into every matter thoroughly and was quite energetic,” says Yamazaki, noting that Fujisaki’s subordinates treated him to a farewell dinner when he was transferred to the US a year later. “It is rare to see people like him work in the battlefield, helping the junior officers.”

During his first stint in DC, Fujisaki represented Japan during the initial negotiations with the US, led by Ambassador Walter Mondale, to relocate the Futenma US Marine base in Okinawa.

“I don’t say that human-to-human relations solve everything, but that contributes a lot to lessening tensions and bringing in mutual understanding,” says Fujisaki. “Diplomacy is all about that.”

In 2005, Fujisaki took up his first ambassadorship, as Japan’s chief diplomat to the United Nations and the World Trade Organization in Geneva.

For years, Japan has lobbied for a permanent seat on the UN Security Council. Currently, only the US, China, Russia, Britain and France have permanent spots. Fujisaki says an expanded council is a worthy goal. “It will take time, but we shouldn’t put down our banner,” he says.

In the spring of 2008, in the final months of the Bush administration, Fujisaki became Japan’s ambassador to the US, a role that requires acumen in a multitude of areas, from trade to terrorism.

“In Geneva, [it] is like going down into a deep hole. Down there are many warriors, kicking and striking each other,” says Fujisaki of the sometimes arduous trade negotiations. “[Being an] ambassador in Washington is like coming out to the surface. No one is kicking you, but there could be landmines. You have to be very careful. Everything you say or you do may be criticized.”

After President Barack Obama was sworn into office, Fujisaki found himself rekindling old relationships with officials from the days of the administration of Bill Clinton. Such ties proved crucial when, in 2009, Japan’s ruling Liberal Democratic Party lost power in a general election for only the second time in postwar history.

“In Washington, [Fujisaki] was deeply connected to the relevant and important people,” says Yamazaki. “[After] the big earthquake…we [were] assisted by the United States very effectively and very warmly, and that was realized by his communication effort.”

While Fujisaki’s diplomatic career came to a close in 2012, his bridge-building continues in his role as president of the America-Japan Society, a position held by a number of former Japanese prime ministers. Last year, Fujisaki organized the society’s centenary celebrations, attended by the emperor and empress and Prime Minister Shinzo Abe and his wife, Akie.

Club Member Terrence Giang served on the anniversary planning committee. He says Fujisaki is the driving force behind the organization’s uptick in membership. “For him, it definitely is not an honorary title,” says Giang.

Fujisaki’s university office is filled with mementos that reflect the decades of close relations between the US and Japan. Among his vast coin collection on display is a rare piece commemorating Woodrow Wilson’s inauguration in 1913. There are also drawings by Dianne Feinstein, the long-serving California senator.

“Sometimes, Americans take Japanese for granted, that we should follow everything Americans do. Sometimes, Japanese take for granted that America sacrificed their young people’s lives for the world’s peace,” says Fujisaki. “We have to be very much aware of such psychology. I can say that because my wife and I have been married for over 40 years, and we often fall into such a trap.”

Relations of all kinds, it seems, require constant tending.