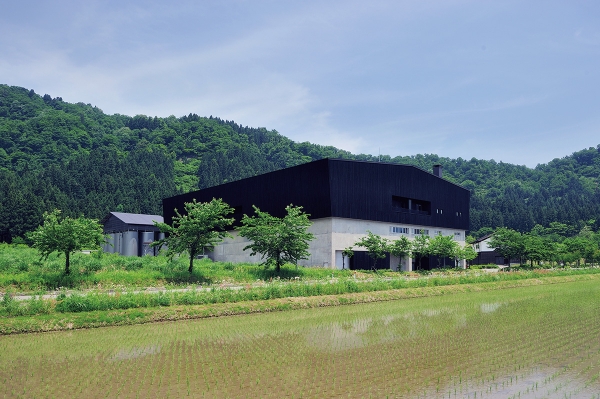 Sake is much more than a drink in Japan. For hundreds of years, the rice-based alcohol has been an integral part of customs, sacred Shinto rituals and ceremonies. It has been used to mark seasons, pledge friendships, ward off evil spirits and celebrate milestones.

In keeping with this tradition, Hakkaisan, a sake brewery in Niigata Prefecture, has produced a one-time sake for the Club’s 90th anniversary.

Jiro Nagumo, owner of Hakkaisan, says it was an honor for the brewery to create a commemorative sake for the Club, particularly as this year marks the 10th anniversary of relations between the two storied institutions.

“Since we hosted the first Hakkaisan dinner at the Takanawa Club in 2008, we have continued our relationship with Tokyo American Club by inviting Members to our brewery in Niigata each year,” says Club Member Nagumo, 59. “It has allowed us to introduce Members to Hakkaisan’s approach to making sake.”

The goal, Nagumo says, was to produce a completely new style of Hakkaisan sake that would appeal to an international audience. The result is a smooth, elegant junmai ginjo, made from rice grains that have been milled down to half their size.

Limited to just 2,000 bottles, the Club sake is produced from Niigata’s own koshi tanrei rice, which was developed by cross-breeding a Niigata sake rice with another superior sake rice grown in western Japan. According to aficionados, koshi tanrei leads to a drink that exudes depth, complexity and a light, refreshing aftertaste.

Nagumo says he believes that his team of master brewers “succeeded in brewing a sake that is both savory and crisp, with a well-balanced taste.”

“In this commemorative year of the Club’s founding, this special sake is the perfect Japanese way to celebrate the occasion,” says Member Miki Ohyama, who leads the Club tour to Hakkaisan each year.

Members will be able to sample this exclusive brew when it is officially launched at the TAC 90th Anniversary Celebration, a 1920s-themed party in the Winter Garden, on May 25. Bottles, adorned with an illustration of the Azabudai Club by Tokyo-based artist Luis Mendo, will be on sale in The Cellar for ¥2,950. The sake will also be available by the tokkuri flask at CHOP Steakhouse, American Bar & Grill and Traders’ Bar.

Established by Nagumo’s grandfather, Koichi Nagumo, in 1922 (six years before the Club was founded), Hakkaisan at first struggled to compete with the breweries of Kyoto and Kobe, Japan’s traditional sake production areas.

“My grandfather was a very stubborn man who both loved his sake and a good challenge, but my father wasn’t really interested in sake brewing,” Nagumo told INTOUCH three years ago. “He was the last of six children and inherited his father’s business only because his brothers wanted to pursue different careers. For me, it was the same. I didn’t know what to do with my life, but I was familiar with the whole sake-brewing process because I had been there the whole time, so eventually I took up the job.”

As domestic demand for sake declined in Japan’s post-economic bubble years, Nagumo realized that survival lay in the premium sake market. The brewery set about overhauling its methods while targeting markets abroad. Hakkaisan is now sold in more than 20 countries.

“We started in New York about 30 years ago,” Nagumo said in 2015. “Since then, Japanese cuisine has become increasingly popular both in America and Europe, helping sake penetrate foreign markets. For us, those markets are our new frontier.”

“We are confident that Members will be able to enjoy the Club sake with different types of food and cuisine from all over the world,” Nagumo says. “In addition, we hope this special sake encourages Members to taste and enjoy more sake.”

Members can preorder bottles of the Club anniversary sake via the online Wine Shop or at The Cellar.