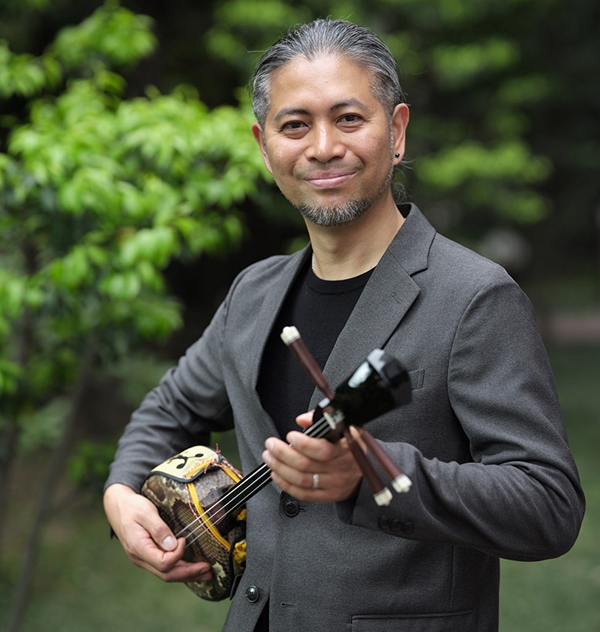 Hidekatsu Miyazato didn’t know what home was until he left it behind.

“My first time in Tokyo, I thought I was in a different country,” he says.

Miyazato, 46, grew up in Naha, Okinawa’s capital, where the scent of the sea hangs in the air and a beach is never far away. It’s the kind of place that can disorient mainlanders used to the frenetic bustle of city life.

“Everyone in Okinawa goes along at their own pace,” Miyazato says of the islands’ carefree vibe.

Come 1990, though, Miyazato had to leave the white-sand beaches for college in Tokyo. It was a culture shock.

“I would be strolling along a sidewalk [in Tokyo] with people buzzing past me,” he says. “And I would never get on those crowded trains. I can’t even ride them now.”

Though it’s been nearly 30 years since Miyazato’s rough introduction to Tokyo, his deep olive tan and surfer’s bun evoke more seaside than cityscape.

“When I left,” he explains, “I really didn’t think about life in Okinawa at all. But after a little while, I’d run across an Okinawan restaurant and find myself drawn in. That kind of longing for home started to set in.”

Escaping Tokyo whenever he could, Miyazato met some fellow travelers from Australia while cycling across Hokkaido. One had a portable didgeridoo and the other a guitar. Though the three didn’t share a common tongue, that didn’t seem to matter when the Aussies started playing.

“Something about the music made it easy for us all to get along really well,” Miyazato recalls. “The guitarist, in particular, was really talented, and I was already looking for a way to reconnect with Okinawa, so I decided to pick up Okinawa’s version of the guitar.”

Slightly larger than a ukulele, the three-stringed sanshin is perhaps most notable for its striking body banded with python snakeskin. The sanshin’s history traces back to an instrument from premodern China that was imported and then adapted by the island’s indigenous Ryukyuan people.

“When I try to explain what makes the sanshin special,” explains Miyazato, “I have to start with its nearly 600-year history back to when Okinawa was still the Ryukyu kingdom.”

Until the early 17th century, the independent Ryukyu islands considered the sanshin their national instrument. Samurai invasions and official annexation in 1879 would spell the end of the native polity and the sanshin’s courtly preeminence, but its popularity among the people of the newly created prefecture of Okinawa never waned.

When the workday ended in Naha, Miyazato explains, friends and family would gather outdoors with food, sake and a few sanshin to strike up a genial mood.

“They’d drink, eat, sing and dance out in the open together,” he says. “The sanshin has always been associated with having fun, letting loose, things like that.”

Miyazato bought his first sanshin after he returned from Hokkaido. He brought it with him on his next journey, through Nepal and India, and, much like the Australians who inspired him, Miyazato found himself the musical bard bridging gaps language never could.

“Wherever I played, even though we couldn’t understand one another, the people who listened enjoyed the music,” he says. “That really struck me. From then on, I’ve never stopped playing the sanshin.”

When Miyazato steps on stage at this month’s First Friday bash celebrating all things Okinawa, it’ll be just the latest example of his island living evangelism in the world’s largest metropolis. In addition to running his own sanshin school, Miyazato edits a newsletter and hosts a weekly radio show promoting Okinawan artists and cultural events. Last month, he emceed the perennially popular two-day Okinawa festival in Yoyogi Park.

Though the Winter Garden is no subtropical beach, Miyazato will be doing his best to spread his Okinawan frame of mind, aided by cups of Okinawa’s indigenous awamori spirit and dishes like braised pork belly and sweet potato dumplings.

And if any Members still find themselves tiring of Tokyo life, Miyazato has the perfect fix.

“From the nature to the culture and the architecture,” he says, “the best way to understand Okinawa is to visit yourself.”