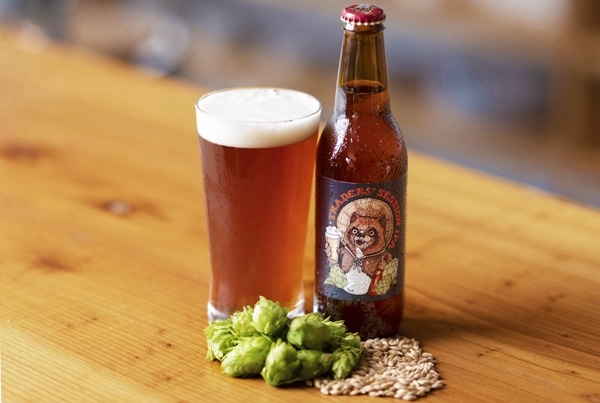 The American founder of one of Japan’s premier craft breweries explains why the Club’s exclusive IPA is the result of so much more than hops, malt and a fancy label.

How did beer go from nectar of the gods to today’s off-the-wall, drink-if-you-dare brews?

Fermentation, it’s believed, was discovered rather than invented. When ancient Egyptians noticed their emmer wheat stockpiles reacting to airborne yeast, it was only a matter of time before drinkable suds emerged. By 1,800 BCE, craft beer heads in Sumer were chiseling cuneiform odes to Ninkasi, the goddess of Mesopotamian brewing.

“You are the one who holds with both hands the great sweet wort, brewing it with honey and wine,” goes the hymn recognized as history’s first homebrewer’s manual. “When you pour out the filtered beer of the collector vat, it is the onrush of the Tigris and Euphrates.”

That Sumerian concoction may have resembled unfiltered slop, but such an invocation reflects the place of esteem brewers and their brews have occupied in society since the first batch was offered to imbibers.

Ninkasi would shudder to think what we’re drinking today.

Then there’s the daredevil category: the Mangalista Pig Porter (ingredients: real pig heads and bones) and the Iceland-based Steðji’s Hvalur 2, brewed with whale testicles smoked in sheep dung (Steðji’s brewer: “The health department didn’t want us to produce it at first.”).

“I’d like to challenge somebody,” Bryan Baird (pictured) says. “You drink two bottles of this every day for the next year.”

Baird Beer’s founder and brewmaster has little patience for craft beer gimmicks. He equates peanut butter infusions and animal extracts in the IPA world to the often inscrutable tasting notes in the wine industry.

“Beer has always been more of an everyman’s drink,” says Baird, 52. “Most craft brewers, the good ones, they’re the furthest thing from snobs.” 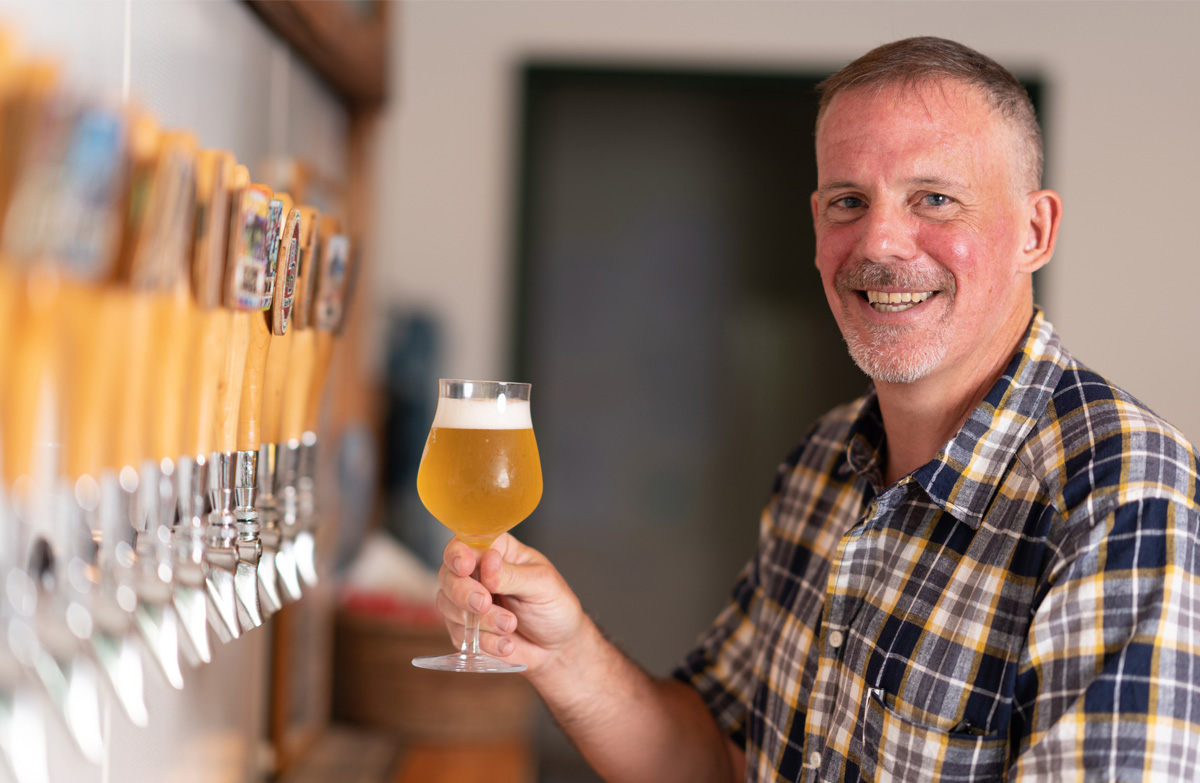 Behind the bar at Baird’s three-story brewery in pastoral Shuzenji, you’ll find 20 beers on tap plus a handful of seasonal creations. They run the gamut from IPAs and wheat ales to porters and stouts, but they all rest on Baird’s personal and professional mantra: Balance. Character. Complexity.

When the Club approached Baird to brew its exclusive Traders’ Session IPA, it was precisely for that commitment to beer that competes on nothing but its own expertly crafted merits.

“Traders’ Session IPA is in this sweet spot,” Baird explains. “It’s a characterful, interesting beer that’s not out there on any sort of limb.”

Members who have tasted Traders’ Session IPA on tap at the Club can easily detect the harmony of the American Pacific Northwest hop blend and hearty malt backbone. With an ABV (alcohol by volume) of 5.5 percent and an IBU (international bitterness unit) rating of 45, it’s neither too strong nor too weak, neither too bitter nor too bland.

In the brewmaster’s words, Traders’ Session IPA has enough to welcome craft beer newcomers into the fold while still appealing to veterans. And now that the Club brew is available in bottles, complete with a label featuring the mischievous, merrymaking tanuki racoon of Japanese folk tales, Members can enjoy its hoppy flavors away from the Club, too.

The Club IPA represents a milestone for the American-style craft brewery.

Back in 2000, the craft beer market in Japan didn’t exist. Jibiru was the term for locally brewed, small-batch beer, but its origin as a marketing tool of ski resorts and destination wedding venues reflected its poor quality.

“All these places were using jibiru as some mechanism to achieve something else,” Baird explains. “It wasn’t about the beer, and it so happens that the beer wasn’t that good. When the beer isn’t good, it isn’t going to accomplish anything.”

When Baird opened his first taproom in Numazu (the 30-liter brewing system was tucked under the bar’s floorboards), the Ohio native would have to explain to the trickle of patrons this new category of microbrews that was taking off back home in the United States.

Baird Beer grew slowly, but it grew. In 2003, Baird upgraded to a 250-liter system, then again a few years later to a kiloliter setup. He expanded the original Numazu taproom, then opened others in Nakameguro, Harajuku and elsewhere in Tokyo and Yokohama. Around 2010, Baird began scouting locations for what would become the three-story, 6,000-liter brewery in Shuzenji. It was completed in 2014.

Expanding from 30 liters to 6,000 in a decade and a half is enough to rip the heart out of any craft brewery. Not Baird. 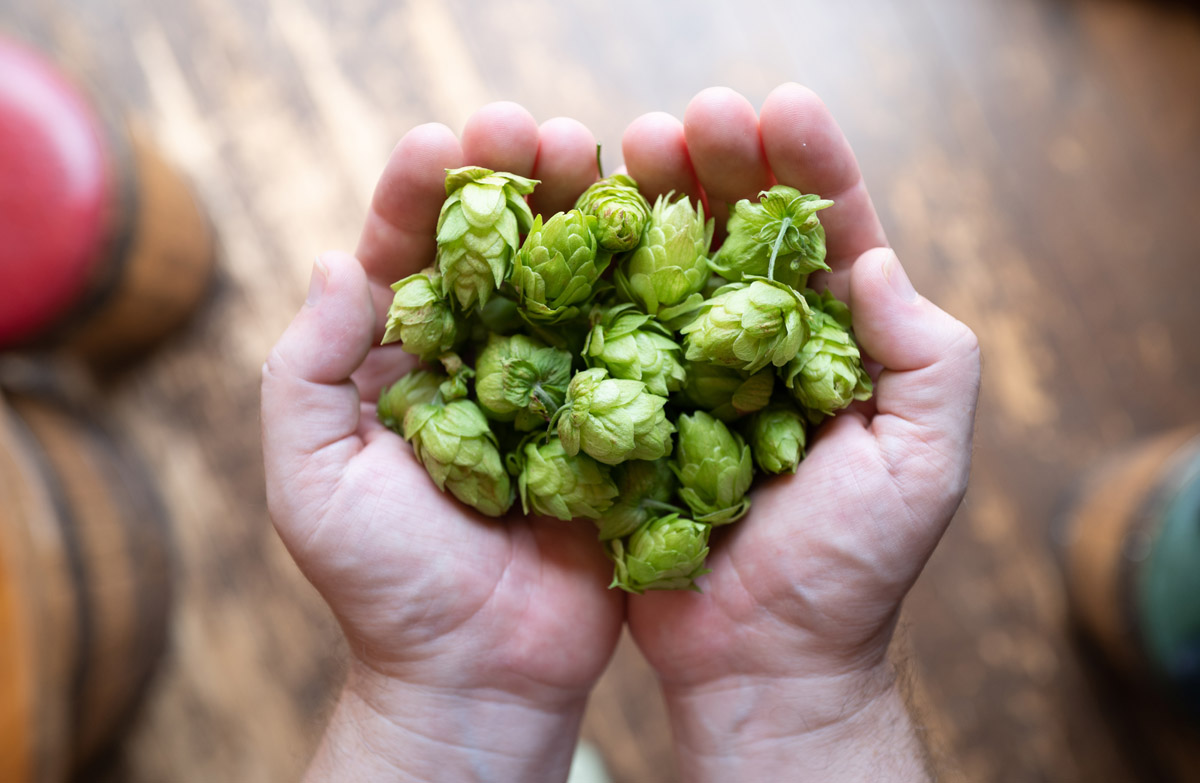 Covering two walls of Baird’s office overlooking the brewery tanks are floor-to-ceiling shelves. Three-ring binders take up every inch. It’s a habit Baird picked up back in 1997 during brewing school in California (he later interned at Redhook Brewery in Seattle).

“Beer is a combination of passion and creativity on the one hand and being really detailed on the other,” he says. “Our beer has to happen within the rubric of consistency. It has to be consistently excellent all the time.”

It’s a battle between uniformity and reliability that cuts to the core of craft brewing. Uniformity is paramount for Asahi: any time someone cracks a Super Dry, whether it’s in Hokkaido or Kyushu, that beer must deliver the same taste as it would on the brewery floor. The same holds true for McDonald’s, Apple or any other global brand.

A reliably brilliant beer is Baird’s goal. When he can’t acquire a certain hop breed or his malt characteristic has changed, the onus is on the brewmaster to adapt. One batch may differ slightly to the next as the brewer adjusts to the vagaries of nature, but that’s no excuse to brew a beer that doesn’t meet his exacting standards.

“Beers of character come from a deeper place, an idiosyncratic place,” he says.

For most drinkers, the choice between draft and bottle is an easy one. Baird isn’t so sure. He dry-hops all his beers for a raw, crisp flavor and recaptures the carbon dioxide produced during fermentation to carbonize every keg and bottle that leaves the brewery.

That’s Baird the brewmaster’s answer. Now that Trader’s Session IPA is bottled for Members to enjoy straight from their own fridge, Baird the beer lover cops, at least a little, to an ulterior motive.

Bottles of Traders’ Session IPA are available at The Cellar and all Club restaurants, with the draft version served at Traders’ Bar.