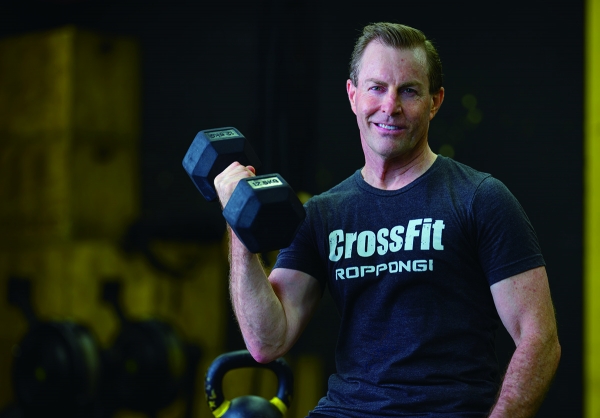 Carrying “sugar bags” and a long-term injury, Member Adam Cunneen discovered an addictive workout regimen that he has no intention of kicking.

Four years ago, I was at the movies and I was kind of uncomfortable. The truth was my belly was sticking out. I had to undo my belt and pants to watch the movie. And I thought, “That’s no good. I’m going to do something about that.”

On top of that, I have a long-term piriformis injury. It’s a small muscle under the glute and mine gets constricted from an injury I got when I was younger. What I wanted to do was build core strength.

I played semi-professional soccer back in Australia, I’ve done Ironman triathlons and I work out in the gym. But my friend said to me, “Come along to CrossFit and take a trial class.” They explained that it was an intense exercise regime built across Olympic weightlifting and gymnastics. So I rolled up to try and remedy my sad body condition.

One of the first exercises was toes to bar. A lot of people do an exercise where you hold onto a bar and raise your knees to your chest. In CrossFit, you raise your toes up to the bar, so it takes quite a lot of core strength.

The ladies next to me were knocking off sets of 10 of these. I did about three and Nicholas Pettas, the instructor, comes over to me and says, “You look a bit pale. Do you want to sit down?”

What I discovered on that very first day is that this high-intensity, power-infused, endurance exercise is a completely different measure of fitness. I found my body was sore and I was using muscles I hadn’t used before. I was pretty much hooked at that point.

It’s a one-hour workout. You start with a quite physical warmup, with exercises like burpees, bear crawls and jump rope. Then you do strength work with Olympic lifting. When everybody starts, nobody has correct technique. It’s not a natural set of moves, so you have to learn carefully.

There’s also quite a lot of gymnastics thrown into the mix, like muscle-ups, handstand pushups and single-leg squats. Despite the adrenalin that is pumping through you during the workout, I try and stay safe to avoid injury.

It’s just an hour, so it fits into my daily cycle. The intensity of the workout is like nothing else. Even when I trained in a second-division [soccer team], it was not the same. The other thing I’ve grown to like is the community support from the people around you.

Until now, the [annual] open competition has been five weeks, with one exercise challenge for each week. And each exercise has to be [assessed] by an accredited judge. The open is your chance to see where you sit against other people. In 2017 and 2018, I was No 1 in Japan in my age group, 55 to 60.

After I started CrossFit, I lost about 9 kilos. And then I started getting heavier because of the muscle growth from the workouts. I am now in the best physical shape ever. I like cycling and golf, so it gives me the base fitness to do those things well.

I was not rudderless but I was lazy, comparatively. CrossFit has given me purpose and it’s transformed my body. It’s changed my life.