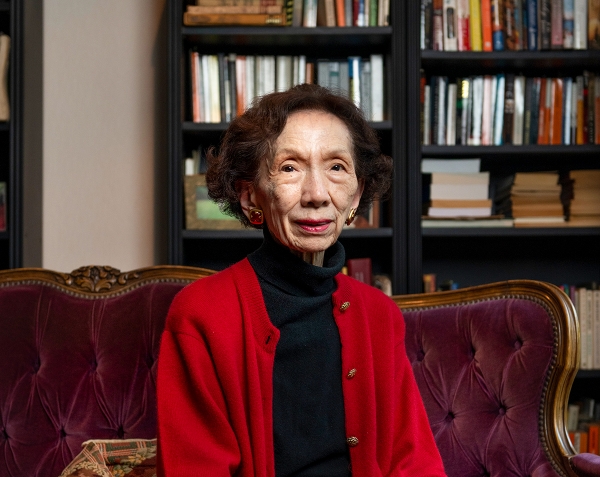 After a childhood abroad, one Member shares how the Club’s community of bibliophiles helps her stay connected with her literary past.

After World War II, the average Japanese citizen couldn’t travel overseas until 1964, the year of the Tokyo Olympics. The restriction, designed to protect Japan’s foreign currency reserves, didn’t apply to Ayako Ishizaka, though.

Daughter of diplomat Baron Shu Tomii, Ishizaka, 89, spent her childhood hopping between the world’s major capitals. The Member learned to walk in Germany, perfected her English in California and fell in love with the great literary works of the Western canon during stints in Britain, Canada and Argentina. (Her memoir of that time, A Japanese Diplomat’s Daughter, is available at the Library.)

After Japan formally surrendered in 1945, the family was repatriated to Tokyo. Soon enough, the allure of foreign lands proved too strong for the 21-year-old to resist.

When the Allied occupation forces launched a program for select citizens to go abroad for 12-month stints, Ishizaka cajoled an extra year out of the administrators. She studied American literature at Yale University and the University of Pennsylvania.

With help from former Ambassador to Japan Joseph Grew and soon-to-be UN diplomat Sadako Ogata, Ishizaka witnessed life in Washington, DC from the protocols desk at the reestablished Japanese Embassy.

“Two wonderful years,” says Ishizaka, sitting in her Shibuya home’s English-style parlor. “I would advise anybody to go and see another place. Experiencing it is really quite something.”

Following her return to Japan, Ishizaka lectured for years on American and English literature at Tokyo’s University of the Sacred Heart and Tsuda College, as well as at New Jersey’s Fairleigh Dickinson University. A bookshelf along one wall, crammed tight with well-worn and dog-eared titles, has all the haphazard charm of an academic’s tireless mind.

Ishizaka will celebrate her 90th birthday in March. The spirit is willing, but the flesh is weak, she says. Still, she considers it a necessity to maintain her literary life as perhaps the most prestigious member of the Club’s monthly Book Lovers’ Group.

“When you read in a book group, you are introduced to books that you may not have selected by yourself,” says Ishizaka between sips of tea from her lacquerware cup, “so your viewpoint is widened and you find yourself in a new world.”

In October, the group reflected on Margaret Atwood’s The Testaments, the Man Booker Prize-winning sequel to the landmark 1985 work The Handmaid’s Tale. Describing the books as “very telling observations of present-day America,” Ishizaka sees inevitable comparisons between her time in a peaceful postwar America and the country’s more nuanced and tumultuous period today.

After years leading discussions from the lectern, Ishizaka is content now to take a back seat as a member of the Club’s literati while continuing to savor great writing in all its forms.

“As an American friend of mine said, ‘Living in a foreign land, you don’t lose the language,’” Ishizaka says “‘You lose the poetry of it.’”