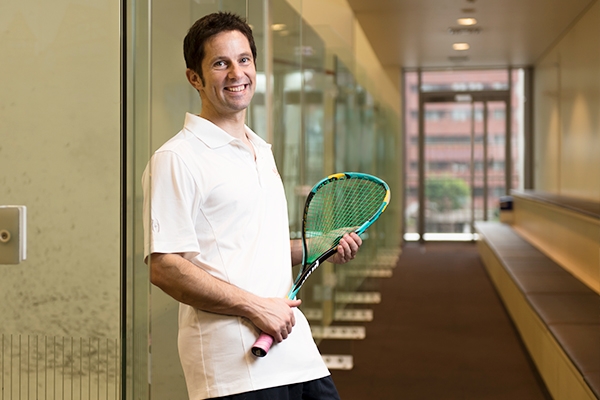 Member Jonathan Siegel explains how the Club helped him in his speedy, post-surgery return to the sport he loves.

Before I left for Japan [in 2016], I ran a marathon in San Francisco and I can say I didn’t do as full and thorough a training program as I should have done. I started to have a tightness and swelling in my ankle.

I later went to see Dr Kevin Stone, a world expert in sports surgery in San Francisco. I did an MRI and it was clear that there was this little piece of bone in the joint irritating it. He also noticed I had an awful lot of play in the joint. He suggested that if he went in to remove the bone spur, he could also do a Broström repair, which means he folds the ligament over and staples it.

He said if the inflammation continued, I would have five or 10 years on the joint. But if I got the procedure, I would have maybe 15, 20, 25 years. Rather than exacerbate the situation, I bit the bullet and had the surgery.

I woke up in the middle of the night after the surgery with tearing pain in my foot and wondering about all the damage I’d done to it. I didn’t really know how long it would take to recover. It was amazing how quickly my calf muscle just shrank to nothing. But if you overuse the joint, you risk injuring it. There was that delicate balance. That’s where [Club trainer and osteopath] Kochi [Uesaka] came in.

A lot of our early work was just getting the joint ready to take pressure. Then it was about doing weight-bearing and balance activities. Those went into light, dynamic movements then weighted movements. I was seeing Koichi three to five times a week. I would not accept not recovering.

At the six-month mark, you should be able to jog and do those kinds of activities. I think I hit that point at the four-month mark. I was delighted to get back playing squash. You know, you never realize how much you like something until you have it taken away from you.

Squash is definitely an outlet for all the energy I carry. I’ve played racket sports for about 36 years. I was very much into racquetball and played in high school at the competitive amateur level and then intramural racquetball in college. When I was in Santa Barbara, the local club had squash.

I have played other sports, but it’s unusual to have the same kind of intensity. On the other side, it’s the camaraderie. I love being a part of the [Club squash] community. Once I did get back playing, I continued to take my physio beyond the level of where I started. It became clear when somebody asked me what I had been doing to get my squash game up. He said he’d never seen me move so well.

Not only did Koichi get me through the recovery, but he got me back better than where I started. He was methodical in keeping me on the recovery plan. There’s a deep appreciation in my heart for what he’s done. He and The Spa met world-class expectations.

I have no swelling and my ankle is robust. It thrills me to be back playing.

Learn more about squash at the Club.