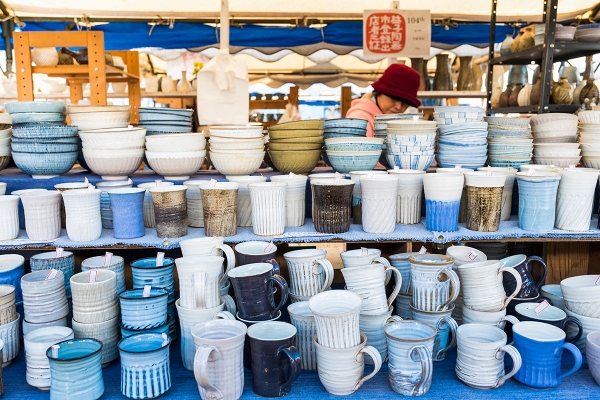 As soon as the tremors stopped, Kazumi Otsuka made for the car. The quake had been strong in Gunma Prefecture, but the radio news said it was much worse in neighboring Tochigi.

“The expressways were closed and the traffic lights were all out,” Otsuka, president of Mashiko pottery promotion firm Moegi, remembers of his return home on the morning of March 11, 2011. “It took about 10 or 12 hours to drive back to Mashiko.”

Otsuka, 50, checked on his wife and two young children and then joined the rest of the town taking stock of the damage. Whatever ceramic pots, teacups, vases and jars were left unsecured on the shelves of Mashiko’s countless pottery shops lay shattered.

Of the town’s 50 traditional wood-fired noborigama climbing kilns, it seemed all but five had collapsed in the quake.

“Quite soon after the disaster, people started discussing what to do,” Otsuka says. “How to get Mashiko back to the town it used to be.”

Respected for generations as the source of ceramics stocking Tokyo’s kitchens, Mashiko gained a new-found fame when artist Shoji Hamada relocated to the small town in the early 1900s. In Mashiko’s kilns, Hamada saw more than utilitarian saucers and pots. After a lifetime of work that would see Hamada bestowed with the title of living national treasure in 1955, Mashiko’s unique glaze and mingei folk art came to achieve worldwide recognition.

During a visit to Mashiko next month, Members will be able to see Hamada’s lasting legacy on Japanese ceramics through a guided tour of the master’s workspace (the day trip will also take in a professional potter’s working kiln and the local Tonoike brewery for a sake tasting).

After the 2011 earthquake, however, only rubble remained of Hamada’s kiln at the Sankokan Museum.

“There was a great feeling of unity then,” says Otsuka. “That was probably something Hamada set in motion so many years ago.”

As people across Tohoku began to rebuild, volunteers in Mashiko inspected the surviving kilns and artists stoked the fires for new wares.

“There are only two craftsmen in Mashiko who can build new kilns, and they were needed almost everywhere after the earthquake,” Otsuka explains.

By the time of the biannual pottery festival in May, nearly half a million visitors arrived in town to show their support by purchasing the pieces Otsuka and his fellow Mashiko artisans had labored over. Despite the destruction two months earlier, sales accounted for nearly 80 percent of previous years.

Over the next 18 months, experts also worked to restore Hamada’s personal kiln to the late artist’s preferences.

That, Otsuka says, may not have happened without a ¥4 million donation from the Club.

“Every autumn, we have a group [from the Club] come visit Mashiko,” Otsuka says. “This might be the first time in April, but it’ll be a warm welcome just the same.”