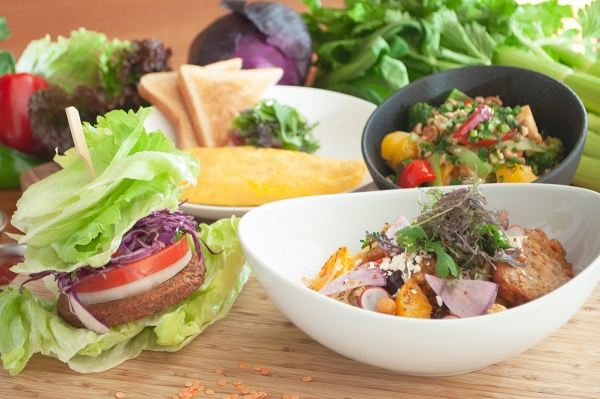 With more people turning to vegetarianism and veganism, the Club is rolling out a host of healthy dishes that compromise nothing in flavor.

That summer, she received her own diagnosis: breast cancer.

“That’s what prompted me to become vegan,” says Wright, 54.

The American Member respects those driven by moral imperatives, but after medical treatment and some research on the benefits of a vegan diet, Wright viewed her lifestyle shift as a necessity. Living in Nagoya at the time, she says making the switch proved easier than sticking to it.

“At one point, I was eating no cheese and almost no dairy,” she says. “We didn’t eat out a lot.”

Though Japan was once almost entirely vegetarian in adherence with pacifist Buddhist edicts, the country’s embrace of the West in the late 19th century led to the introduction of beef and chicken on menus. For the community of vegetarians and vegans in Japan today, there’s an added challenge of avoiding the ubiquitous dashi soup stock, which is made from bonito.

On top of all that, Wright and others who ask for vegan- and vegetarian-friendly adjustments at restaurants see their modest requests run up against Japan’s prevailing teiban set menu ethos that rejects, on principle, even the slightest accommodation.

“A lot of Members don’t necessarily want to have to ask, ‘I’m a vegetarian. What can you do for me?’” says the Club’s executive chef, Lindsay Gray, of his kitchens’ more flexible approach. “They’d rather sit down and go, ‘Oh, these are my options.’”

From early-morning bites in Vista to late-night entrées with family and friends at Rainbow Café, Café Med or American Bar & Grill, new vegan-, vegetarian- and selectarian-friendly dishes are on the menu to tempt even the most committed carnivores.

Available now, the highlights include a brown rice and cashew burger topped with red cabbage, cilantro slaw and lemon-tahini dressing. For a tangy punch, there’s the harissa-spiced power bowls with roasted market veggies, falafel, warm lentils and goat cheese. And how about the protein-packed smoked kung pao tofu with sweet peppers and fresh bok choy?

With even more dishes, including weekend specials, set to be rolled out, this is no paean to food-conscious diners tired of compromising their ideals or their health.

“Ultimately, we always try to think of flavor foremost,” says Gray. “The chefs haven’t forgotten you out there.”

Typical of a club run by and for its membership, Members like Wright are the drivers of change that benefits those of all dietary persuasions.

“I do my Tell TACs [Club comment cards],” says Wright. “We’re making progress, which is good.”

And next on Wright’s wish list? An all-natural black bean burger.

“The elusive black bean burger,” says Gray with a knowing nod. “I’m going to do a little research.”

Members can share suggestions or thoughts on Club services and facilities through the Tell TAC feedback cards online and around the Club.