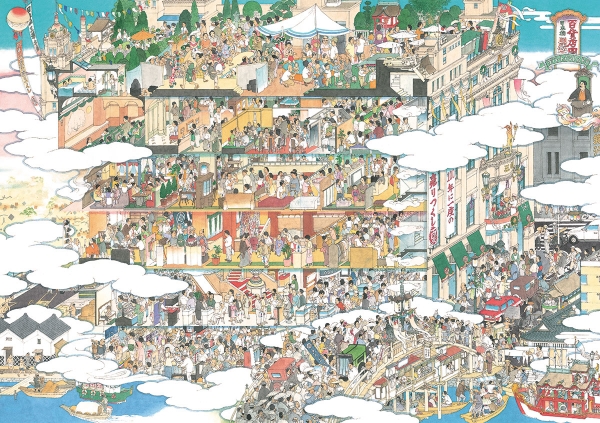 Much more than just frames on the wall, the Nihonbashi Club’s art collection symbolizes everything the facility aspires to be.

When the Club’s Nihonbashi satellite facility opens this spring, it will be more than just a place to eat, drink and exercise. For many Members, it will be a home away from home.

And like any inviting home, the Club will feature all the artistic accoutrements that help turn a space into an inviting retreat.

“One of the key points around [the Nihonbashi Club] is creating an atmosphere of what I call ‘urban sophistication,’” says TAC Nihonbashi Task Force member Terry White, who spearheaded the first-ever art collection curated for the Club. “And art is a key component of that.”

At least 29 works of art, from acrylics on canvas to pieces of pottery, will adorn the Nihonbashi Club. Selected by the curatorial team at Arts Initiative Tokyo (AIT), the collection represents a bridge between cultures, just like the Club itself.

“We’ve managed to select artists that contribute to this sort of story,” says Roger McDonald, a founding member of AIT. “[The collection is] cross-generational, across time and across space, going from the United States to Japan.”

Alongside his colleagues at AIT, McDonald worked with White and the task force to select artists with ties to both the US and Japan. In many cases, this came in the form of Japanese artists who studied or trained in the States at some point. But there are also American artists who honed their craft under Japanese masters.

One Japanese artist, despite having never visited the US, bases her paintings on scenes from American movies and culture, further solidifying that link between the two countries and cultures.

“I think that immediately brings a kind of tight focus to the whole project,” says McDonald. “I think it is a fairly one-of-a-kind collection.”

That exceptionalism will greet Members the moment they arrive at the Club. Hanging near the entrance will be two prints by Akira Yamaguchi. Depicting the area’s famous landmarks of Mitsukoshi department store and the Nihonbashi Bridge, the works will serve as a stunning interior touch.

“It’s almost like manga but it’s a contemporary ukiyo-e sort of style,” McDonald says of Yamaguchi’s unique approach. “[The prints] are something which you walk up to and look at closely and you sort of get lost in.”

“What [they] always inspire are conversation and [reflection],” adds White.

In a matter of months, Members will be able to view the full collection for themselves. Though with something as subjective as art, White is under no presuppositions that praise will be unanimous—and perhaps rightly so.